Unlocking the Value Inside Enero

Marketing conglomerate Enero Group (EGG) has been a volatile and frustrating investment in recent years. Following a near death experience under previous management, the current management team gradually increased EBITDA margins. It looked like Enero was reaching its potential after a long, grinding turnaround. But in the last 10 months things started to go wrong. 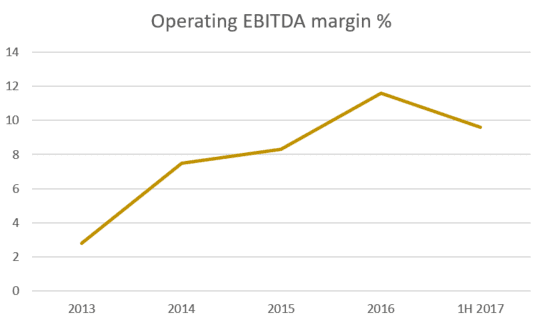 The Brexit vote led to the depreciation of the pound, where Enero derives almost half of its revenue. This was followed by UK client timidity with the final kick in the guts being the loss of its largest client, Virgin Atlantic, which was 7% of revenue.

Where does that leave things now?

The stock currently looks expensive on an earnings multiple basis, trading on over 20 times forecast 2017 profit. So it will take years to realise the value of the investment if we have to wait for an earnings recovery.

We need the board and management to take the initiative and unlock the value inherent in the company.

How much could Enero be worth? The current $1.00 share price equates to a market capitalisation of $86m. For this shareholders get $34m of cash, $22m of franking credits and about $110-120m of revenue.

Compared to global peers, $1 per share is an absurdly low price. Enero’s peers trade on an enterprise value to revenue multiple of 1.5 to 1.7 times. Enterprise value refers to the total of a company’s market capitalisation and its net debt. 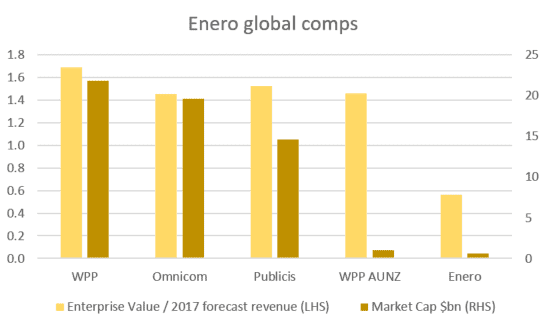 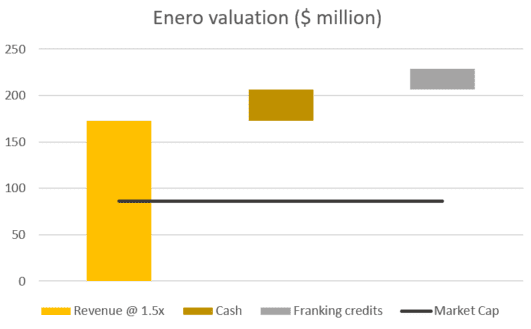 So why is Enero trading at less than half of this valuation? There are two main reasons.

Low Margins a Result of Being Sub-Scale

Enero’s depressed share price is partly a function of being sub-scale. Its operating margins before corporate costs are comparable to global peers. But a relatively low revenue base results in high corporate overheads as a percentage of revenue. Corporate costs are crimping Enero’s margins. We believe management can do little more to reduce corporate costs following their strong focus on reducing these in recent years. The only way to improve margins is to increase scale, i.e. grow revenue. But this could take years and involve risky acquisitions. A quicker and less risky solution would be for a global peer to acquire Enero.

The other main reason for Enero’s low share price is its inability to pay dividends. This relates to a historical agreement with the vendors of its acquisitions. A key contributor to Enero’s near death experience in 2010 was its large deferred consideration liability for acquisitions made. Enero underwent a restructure and capital raising with earnout agreements modified to restrict Enero from paying dividends or buying back shares until the earlier of September 2018 or when they have been paid. With Enero’s cash build up and unused franking credits, being unable to pay dividends is not ideal.

Fortunately, the deferred consideration liability is down to $5m. We believe management may be able to renegotiate the vendor agreement to bring forward the payment of dividends (presumably at a small cost). With 2017 expected to produce five cents per share of profit and low capital requirements, the company should be able to pay out all of its profit as a fully franked dividend. This would lead to a 5% fully franked dividend yield, which should grow as earnings recover after Brexit induced weakness.

We also estimate that the company has about $20m excess cash (i.e. cash not required for the day to day running of the business). So we will be encouraging management and the board to use this cash to pay a fully franked special dividend, which would equate to 23 cents per share.

One thought on “Unlocking the Value Inside Enero”

Gareth Brown @forager_gareth
RT @AlderLaneeggs: Where are the crybabies who wanted the Stock Market to be closed 25% ago? @ScottWapnerCNBC @davidfaber @LJKawa You guys…
Share on

Gareth Brown @forager_gareth
@10footinvestor Ah, you beat us! One day, over a glass of Grüner Veltliner, we'll look back on those purchase prices fondly I suspect
Share on

Gareth Brown @forager_gareth
@lifttheoffer Just a long position in Flughafen Wien, we don't short. We had sold some of our holding in December,… https://t.co/PpFip5LkjN
Share on