RHG to benefit from RMBS revival

The RMBS market is showing signs of life. That should bring competition back to Australia's home loan market and RHG is well placed to benefit.

Things are improving in the market for Residential Mortgage Backed Securities (RMBS), the main source of funding for Australia’s non-bank lending sector. Three years ago, companies such as Aussie, Wizard and Rams were packaging up residential mortgages by the billions and selling them to super funds, mortgage investment trusts and large overseas investors. With the onset of the GFC, this ‘shadow banking’ system – so called because these companies were doing the lending that banks would historically have done without the regulatory or capital requirements of actually being a bank ­– was one of the first casualties. Scared off by the dismal performance of mortgage backed securities in the US, investors in Australia’s RMBS securities went to ground. Effectively overnight, monthly issuance went from an average of $7bn per month in the first six months of 2007 to crumbs (see graph). 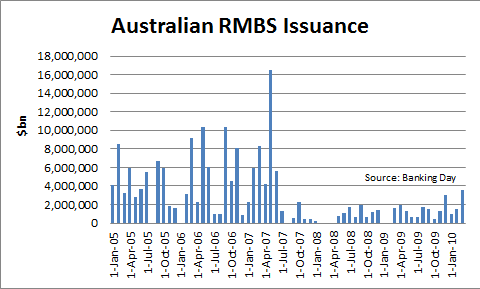 With no funding, the non-bank lenders had no business. Wizard and Aussie had the prescience to align themselves with GE Finance and Commonwealth Bank, respectively, before the crisis took hold. But, until very recently, they haven’t been able to make a loan without using the balance sheets of their partners to provide the finance. The Rams brand was flogged to Westpac in November of 2007, and the only remaining players are tiny and have been dependent on the support of the government, via the AOFM’s RMBS investments.

The drought, however, seems to be coming to an end. According to statistics provided by Banking Day, March was the busiest month for RMBS since June 2007. The $3.6bn worth of RMBS issued so far in March is a long way from the $16.5bn issued in May 2007, but it’s a vast improvement on the previous two years.

Typical margins range from 130 basis points (1.3%) to 150bps. Again, that’s a lot more expensive than the 20 basis point margin during the boom times. But the margins being paid by home owners are also substantially higher thanks to the banks’ increased cost of funding and less competition in the market. If the volumes are maintained and the pricing improves by a further 20-30 basis points, non-bank lenders will be back in the game.

For my old friends at RHG, the timing couldn’t be better. This ASX listed company is what’s left of Rams Home Loans after the brand was sold to Westpac. After the sale, it was left with a three-year agreement not to write any new home loans and a $15bn mortgage portfolio funded by RMBS and warehouse facilities provided by the banks. At 31 January this year, the mortgage book had been paid down to $5.9bn ($2.2bn of RMBS and $3.7bn funded by warehouse facilities).

The return of a functioning RMBS market would enable RHG to refinance the warehouse facilities (which I estimate the company is paying a margin in excess of 220 basis points on) with substantially cheaper, long-term RMBS funding. More importantly, however, the non-compete agreement with Westpac expires in November. By then RHG will have piled up close to $300m in assets as a result of the mortgage book runoff, and management intends to put that capital to work; either re-entering the mortgage market or purchasing another financial services business.

My preference, as a shareholder, has always been to get the majority of capital back as fully-franked dividends. But given that’s probably not going to happen, writing mortgages is my next preferred choice. Chairman John Kinghorn and CEO Glenn Goddard know the business inside out, a $300m war chest would be a substantial competitive advantage in a capital constrained environment and the market ­– from mortgage brokers to home buyers – is crying out for competition to return. RHG could be perfectly placed to deliver it.

Disclosure: I've sold some RHG shares to invest in the Value Fund and provide capital to the management company, Intelligent Investor Funds. But I still own a substantial number of RHG shares.