I worry about the effect of quantitative easing (QE) on already stretched European asset prices. And I feel that QE is a great excuse to postpone many needed structural reforms on the continent, patents and pensions to name just two of many.

But otherwise, I don’t feel qualified to comment on the pros and cons of the European Central Bank’s (ECB) recent decision to start its own QE program. It may well work.

There is, however, one issue nagging at me. Are they chasing a deflationary bogeyman that doesn’t really exist, at least on a continent-wide basis?

Annual inflation in Europe has fallen from a little under 1% 12 months ago to -0.2% at last count, the dreaded deflation. But are all forms of deflation, well, deflationary? 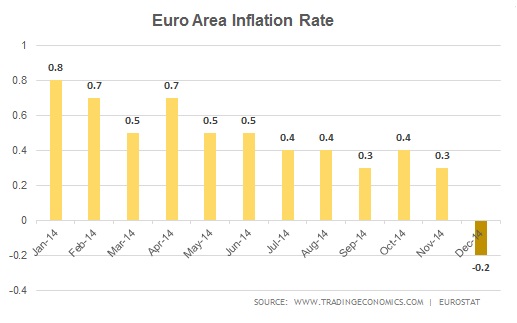 About 0.7% of that price fall (ie most of it) was caused by the falling price of oil—0.53% from the falling price in fuels for transport, and 0.17% from cheaper heating oil. Natural gas prices didn’t have much influence in 2014, but the longer oil stays low, the better the chances that Europe will also source cheaper gas for its massive winter needs.

Falling oil prices might make deflation statistics look even scarier. But that’s missing the forest for the CPI number.

Economic meddlers, sorry central bankers, fear deflation for rational reasons. When the prices of cars, computers or houses are falling, people sensibly delay purchase and risk stalling the economy in the process.

But oil is a price inelastic consumable. When the price of petrol or gas falls, people keep driving to work and keep heating their homes as they did last year. The main difference is that they have more money left in their pockets to use elsewhere. Oil deflation is more like food deflation (good, on average) than longer life products (arguably bad). More so when crude oil and gas are mostly imported from outside the EU.

So, unlike some forms of deflation that retard economic growth, oil price deflation is an economic stimulant for an importer like Europe.

The particularly juicy bit about stimulus from lower oil prices is that it’s rather democratic. Yes, rich people use more oil and gas than the proletariat—flying around the world, powering BMW SUVs and heating larger homes, for example. But they don’t use that much more oil per capita.

And considering that middle and less well-off folk far outnumber rich, the savings disproportionately end up in their hands. They’re likely to spend those savings, boosting their standard of living and the economy in the process.

None of this is to suggest that Europe is or will sail through its troubles. Nor is it any proof that deflation isn't a real threat or that European QE is a bad idea.

But the ironic thing is that Draghi and his minions have been waiting for a negative inflation number to be reported so that they could convince the Germans to allow them to flick the QE switch. With much of that deflation coming from a lower oil price, it’s actually rather stimulative in nature. Europe is currently being aided by two stimulus programs, and only one of them is planned.