Threat to Medibank from Comparison Sites

Mathias Cormann didn’t like my suggestion that comparison websites present an increasing threat to Medibank Private’s business.  The finance minister followed me on the ABC’s The Business last night (the relevant section starts at 3:30) and said comparison sites have been around since he was running a health insurance business more than 10 years ago. Nothing has changed, apparently.

True, I haven’t run a health insurance business. But the numbers presented in Cormann’s Medibank IPO document suggest the world has changed since his own time on the tools.

It is being loudly trumpeted that Medibank is a growing business and that is born out in the policyholder numbers. They grew 1.04% in the 2013 financial year and 1.46% in 2014. More than 1.8 million Australians have a health insurance policy with the company. But table 3.4 on page 43 of the prospectus provides the interesting detail.

Back in 2012, only 15% of Medibank's 188,000 customers signed up through ahm. In 2014, that percentage was 31%. Almost one in three new Medibank signups are arriving through a brand most Australians haven't have heard of. 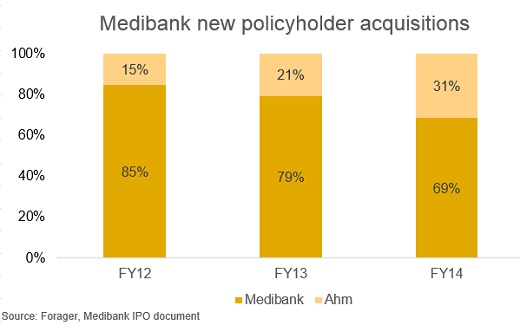 And how are tens of thousands of Australians finding this previously unknown health insurance provider? Well, ahm is sold on comparison websites like iSelect and comparethemarket. Medibank Private is not.

If I had a house, I'd be willing to bet it that almost all ahm customers are coming through these comparison sites. Ahm's growth is replicated in the growth of ‘other’ as a Medibank sales channel, which grew from 12% of Medibank’s total acquisitions to 28% over the same period. 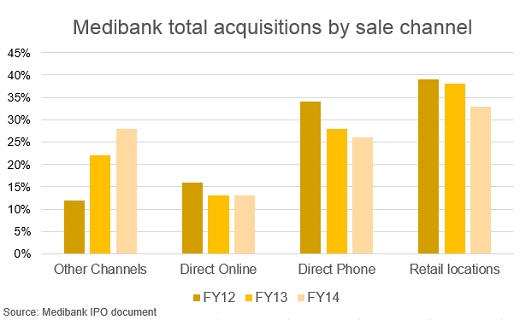 I don’t want to overplay the threat to Medibank’s business. It’s not a big enough issue to give the float a miss – on the merits of the IPO I don’t have a strong view either way. But it’s more of an issue than Cormann is letting on. Comparison websites are stealing market share at a rapid rate. They increase price competition and increase churn rates (Medibank’s churn rate is up 16% over the last two years).

That can’t be good for industry profitability.

15 thoughts on “Threat to Medibank from Comparison Sites”

Gareth Brown @forager_gareth
Last month's Ausbiz interview: Interviewer: "We know yields like that aren't without risk. Are the risks carefully… https://t.co/4iwShpQXmQ
Share on