Walking out of a recent meeting with BMW, friend and former colleague Nathan Bell opined ‘It hadn’t quite dawned on me before, this is the most interesting time in the auto business since Henry Ford’s days’. He’s right.

China is the first explanation. As Chinese get richer, they want a car. And if they’re richer still, they want a German premium car. Bayerische Motoren Werke AG, better known as BMW, sold 36,000 cars in China in 2006 (just 8 short years ago). In 2014, they’ll probably eclipse 450,000. It’s now the single biggest market for BMW, making up more than 20% of sales and more again of profit. 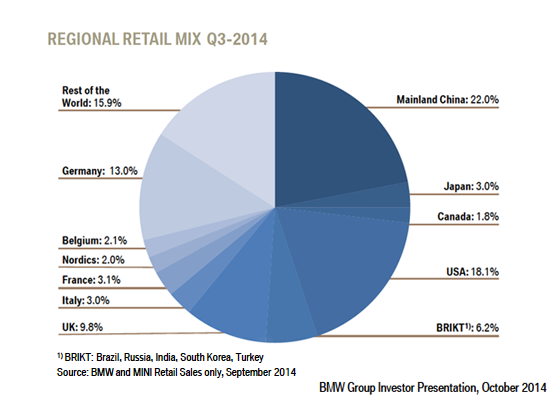 Barring Chinese economic meltdown, they’ll sell significantly more again in a decade. According to Global Insight, there were 15m ‘premium-relevant’ households—BMW’s core market—in China in 2012. They expect that to triple to 46m by 2025, 9% annual growth. Of course, forecasts are there to make fools of us all, but it’s highly likely that the Chinese market will become more important over the coming decades, with inevitable setbacks en route.

The other major shift is in the car technology itself. Electric vehicles and gasoline/electric hybrids are likely to go from new to mainstream, perhaps to dominant over the next few decades. Tesla currently leads the way but BMW is probably the best placed of the premium automakers and is improving quickly. It’s also working on semi-automation and full automation (driverless cars). Lightweight carbon fibre is replacing steel at the top end. The company’s proud engineering history and deep pockets (the auto division is sitting on €11.5bn of net cash) suggests it’s likely to lead rather than follow.

BMW is part automaker, part bank. An impressive bank at that. About 40% of retail buyers use some sort of financing from the company (loan or lease). Those loans and leases mostly stay on BMW’s balance sheet and are funded by bonds, bank loans and even personal savings accounts, popular with Germans concerned about the health of the country’s major banks.

Bought for the ‘sheer driving pleasure’, the borrower has a personal incentive to look after the main loan collateral, and these cars tend to retain significant value in the second-hand market. BMW drivers also tend to be more creditworthy than most. So, even in the horrible year of 2009, the credit loss ratio was below 1.0%. The spread between its loans to customers and the borrowings used to fund it, less all expenses, made up more than 20% of BMW’s net profit last year. This division is a gem.

BMW ordinary shares trade on a PER of less than 10, and pay a 3.1% dividend. A smaller preference share has the same (actually slightly greater) economic rights and currently sells for 23% off the sticker price of the ordinary shares. It’s non-voting, but with various members of the Quandt family controlling almost 50% of the voting stock, those voting rights are hardly worth paying for.

The Forager International Shares Fund doesn’t own any BMW shares, there are also significant risks to consider. Auto making is notoriously cyclical and we’re certain not at the bottom of the cycle today. China might face a substantial economic setback at some stage, perhaps it’s all smoke and mirrors. Even the adoption of pricing parity in China would crimp profits substantially—it currently costs about 40% more for a BMW in China than Germany, although much of this is tax and transport-related (in response, more than 35,000 of the BMWs sold in the United States each year are immediately and probably illegally ‘flipped’ to mainland Chinese buyers). Tesla might genuinely revolutionise the market and be tough to compete against. The sharing economy—a model that might work particularly well with driverless cars—could mean far fewer cars needed on the road.

But this is a great business and one quite likely to be bigger and better a decade from now. It’s firmly on our wish list and we watch and wait.

This excerpt is from the Forager International Share Fund’s September 2014 quarterly report. Please download the report for more detail about the Fund’s recent activities.