In July 2006, the now bankrupt RiverCity Motorway issued a prospectus promising an initial yield of 6% per annum. They paid it for the first few years but the strange thing was the tunnel wasn’t even built at the time of the float. Not one cent of revenue was going to be generated until 2010 when the road was expected to be opened.

As we pointed out at the time, the yield was nothing but a Clayton’s yield. They raised extra money from investors upfront, just so they could give some of it back while the road was under construction. 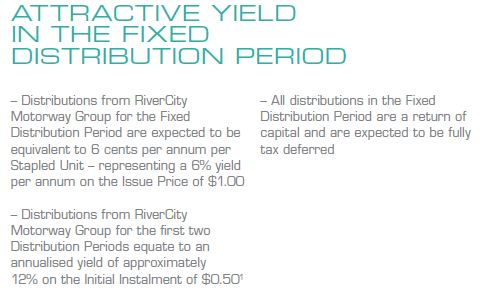 The rationale was simple. Which of these two options would you find easier to sell: a toll road generating a 6% yield (already you’re thinking safe, predictable asset) or; a patch of dirt where you plan on building a toll road that you have no idea how many people will use? All they did with RiverCity was turn the later into the former by raising extra cash upfront.

Whether it’s dodgy agricultural products, Westpoint’s ‘10% guaranteed’ notes or undeveloped infrastructure projects, people are suckers for the lure of yield.

Which brings us to the current proliferation of ‘income securities’ listing on the ASX.

Here are your three choices:

1)      A Westpac deposit, guaranteed by the Australian government, paying you a margin of 1.15% over the bank bill rate;

2)      equity in Westpac bank, generating an earnings yield of bank bills plus 6.6%, which can be enhanced by franking credits, or;

3)      the new issue of Westpac’s equity-like CPS subordinated notes paying you a yield of bank bills plus 3.25%?

I’ll pay up if you picked the term deposit. It’s a very acceptable margin for a very safe investment. Sure, the government says they’ll only guarantee deposits up to $250k. But if the proverbial hits the fan, they’ll pay up.

I don’t own any myself, but I’ll also pay owning the shares if you have to. You don’t get all of that yield in dividends but any profit the bank hangs onto should translate into future growth. There is plenty of risk, which is why I don’t own them, but there is also plenty of reward on offer.

But the subordinated notes? These things are as far from being equity as Greece is from bankrupt. The regulator, APRA, even classifies them as outright equity, which is why the banks love issuing them. The directors pay distributions at their discretion. APRA can stop the distributions even if the board doesn’t want them to. And, if the bank gets into trouble, the notes convert into equity.

And for taking on all of that you get an extra 2% yield over term deposits?

Unlike RiverCity, it's likely investors will get their money back and earn the promised yield. But if you're happy with the risk, buy the equities. If not, put your cash in a deposit. The middle ground is offering you the worst of both worlds.