Aussie Unhinged From the US Economy

For the past few years, the correlation between the AUD/USD exchange rate and the Dow Jones Industrial Average has been extremely high (0.89 for the stats enthusiasts, which means 89% of the movement in the exchange rate can be explained by movements in the Dow Jones Industrial Average). Every time the US economy shows signs of life, the Dow Jones rises, and so does the Aussie dollar. The theory being that a strong US economy means a strong global economy and high commodity prices. Good news for Australia. 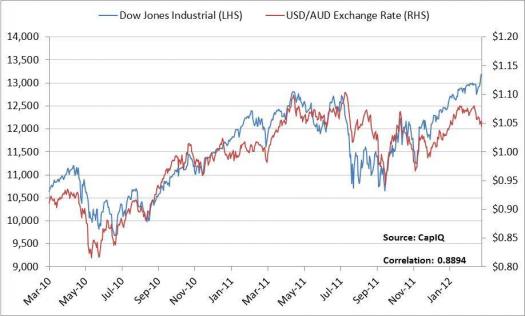 With a large portion of the Value Fund invested in stocks with exposure to the US economy, every piece of good news on US employment or GDP has been offset by bad news on the currency front.

The strength of the correlation has surprised us. For commodity prices, a strong US economy is minor good news. A slowdown in China is major bad news. As we’ve been pointing out for more than a year, internal infrastructure spending is far more important to China’s economy (more specifically, China’s demand for our resources) than exports. So a strong US won’t offset a slowdown in infrastructure spending in China.

I’ve no idea why it’s taken this long, but the nexus seems to have broken. For the past two weeks, the US stock market has gone up while the Aussie dollar has gone down (you can see this clearly for yourself on the far right of the graph). There seems to be more and more fear about the state of the Chinese economy and, no longer constrained by the correlated dollar, stocks like QBE and Computershare, with significant exposure to the US, have been on a tear.

It is, of course, impossible to say with confidence. But I get the feeling we’re at an important inflection point. One we’re very well prepared for.

Steve Johnson @ForagerSteve
@IFM_Economist That % of disposable income data might need checking. How could the gambling losses be 3x in absolut… https://t.co/6N05Bwnqv9
Share on