Messrs Hawke and Keating put us in a truly enviable position.

More than 25 years into what’s likely to be a two generation transition, Australians are well on track to a future where most retirees will be able to fund most of their retirement from their own superannuation nest egg. Government will be a safety net rather than the main benefactor.

Many European countries also have compulsory nationwide user-pays retirement schemes. Workers pay money each month (additional to taxes) and take a monthly annuity once they retire.

Where most of those systems differ from Australia's is that there is no actual pot of capital being set aside. Today’s workers effectively pay today’s retirees, tomorrow’s retirees will get funded by tomorrow’s workers.

My (European) brother in law and I discuss this structure frequently. I say it’s a Ponzi scheme. He thinks it’s as good as the Australian system. He’s smart. I’m right.

Europe’s systems can work quite similarly to the Australian one, as long as the pool of workers doesn’t shrink relatively to the pool of retirees. But if that delicate balance shifts, one (or more) of four things must happen—contributions from tomorrow’s workers must go up, governments must contribute significantly to the system, pension amounts must fall or retirement ages must rise.

The first two options are effectively tax increases on the continent’s workers, already labouring under a massive tax burden that will only rise as an ageing population needs more healthcare and services. The last two options are political mine fields that won’t be discussed unless the issue is forced. The issue will be forced.

The below OECD chart shows how. Increased longevity and stuttering population growth are having an impact. Today, there are roughly 3 German workers for every retiree. By 2050, on current trend, there’ll be less than 2. That's a massive shift. Spain is forecast to go from almost 4 workers per retiree in 2010 to less than 2 by 2050. 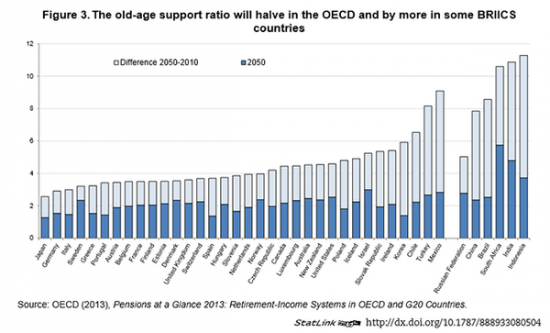 There’s zero chance that tomorrow’s workers will be able to fund that many retirees. If governments think that a working couple can afford to fund the 2.1 kids expected of them, plus 1-point-something retirees, while paying an already high tax burden and while keeping overall wages low enough to retain competitiveness with other nations outside of Europe, they’re in dreamland.

Try to force the issue through the tax system regardless, motivated immigrant workers won’t come and motivated natives will up and leave to America or Australia. That would further exacerbate the problem.

Australia also faces a significant reduction in the number of workers per retiree. It will undoubtedly force change, including an increase to the retirement age. But that big pot of real capital is a substantial buffer that most of Europe doesn’t enjoy. (Now all we need is to stop the financial services industry from stealing all of the money.)

The European systems aren’t so much retirement planning as legally enforced ‘pay and pray’. I really don’t see any point praying, though, because something is going to give. Citizens and their governments will be better placed if they face up to this unpleasant fact sooner rather than later. For a start, young workers should count on working until at least 70.