The Australian media sector has wrecked the careers of many fund managers over the past decade. First were the growth investors — those prepared to pay high multiples for a business they think can grow. A decade ago high earnings multiples (around 20 times profit) were supposedly justified as deregulation was meant to lead to a wave of consolidation. Media moguls like the Packers, Stokeses and Murdochs were supposed to mop up the sector at premium prices. Fairfax (FXJ) was the most prized target, and APN News and Media (APN) wasn’t far behind.

Private equity were next in line for punishment. They emerged as the industry consolidators, using high levels of gearing to pay mind boggling prices for assets (in 2007, APN was the target of a bid by a private equity consortium that was blocked by a shareholder vote at $6.20 per share, a decision which cost them a lot). Perhaps they didn’t foresee the structural changes that were about to hit the industry. More likely they just didn’t anticipate how quickly change would come. Advertising dollars and classifieds revenue shifted online before the usual private equity tricks could be played.

Then the value investors wandered into the briar bush. Once the dust settled, multiples came down to around 10 times profit. In a relative sense, this looked attractive compared to the market. But it turned out ten times next year’s profit is a lot to pay for a business that is rapidly going backwards.

We have thus far managed to avoid the sector. And we still don’t think most valuations reflect the difficulties that lie ahead (particularly for free-to-air televisions stations). But we have made a recent foray into the media space with an investment in NZME (NZM).

Primarily to address distressed balance sheets, media companies have been divesting assets. Unlocking shareholder value has been a very welcome by-product. You may see more on this front from Fairfax this year, with a potential divestment or demerger of its online real estate business Domain. But APN has been at the forefront of this trend, separately listing its outdoor business and selling its regional newspapers to News Corp.

The Fund’s investment is in its most recent demerger.

The newly created company is New Zealand Media and Entertainment, abbreviated to NZME. NZME is the spinoff of APN’s three New Zealand media brands, APN NZ newspapers, The Radio Network (TRN) and GrabOne. The result of the demerger is a company with a portfolio of print, radio and digital brands. A majority of print revenue is derived from the New Zealand Herald masthead. 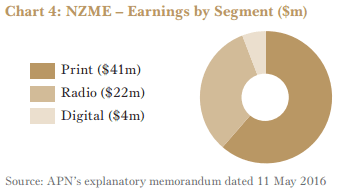 Most of NZME’s earnings are derived from radio and newspapers, with both holding appeal to us. The stable earnings of the radio segment make this a more valuable business than the other segments. It is arguably worth as much as the entire enterprise value alone.

Some believe streaming services such as Pandora and Spotify will lead to radio’s demise. Although this remains a possibility as more cars are connected to the internet, advertising revenues from radio have held up remarkably well around the world. Radio remains one of the most effective ways for advertisers to corral a large audience. It also plays a social function, being a form of companionship as people listen to their favourite hosts.

And perhaps above all, radio and streaming are complementary. For many listeners, radio is an important part of their streaming experience. Listeners tune in to radio to hear the newest releases and discover new music, which they then add to their music stream.

The earnings from this part of the business almost justify the current valuation alone. And the newspapers are likely to be worth something meaningful.

With a large percentage of New Zealand’s population located in Auckland, the New Zealand Herald is effectively a national newspaper, capturing a national readership and more importantly national advertising dollars. This makes it a valuable asset, particularly when compared to Fairfax’s Australian metropolitan mastheads, which are effectively large regional papers.

Newspapers were the first to suffer revenue leakage to the internet. You should be under no illusion that the decline is coming to an end. But some national newspapers are showing that a subscription model can work. The New York Times, for example, is approaching the point where growing subscription revenues can offset declining advertising revenues. If any newspaper is going to survive, it will be a national masthead like the NZ Herald.

Spinoffs often perform poorly early on. They may be too small to own for institutional investors with large-mid cap mandates. Or they may be too small for managers with billions in funds to obtain a material holding. Perhaps some Australian managers aren’t mandated to hold New Zealand stocks.

Whatever the reason, the sell down provided an opportunity to buy NZME at very cheap prices.

And unlike most other media stocks, we don’t believe NZME will turn out to be a value trap. Unshackled from APN, the demerger has enabled management to focus on stripping costs out of the business.

NZME and Fairfax are also in discussions to merge NZME with Fairfax’s New Zealand operations. The potential merger is subject to agreement by both boards and approval by the New Zealand Commerce Commission (NZCC). The NZCC has indicated its initial opposition to the deal, with a final decision due in the first quarter of 2017. There is a lot of potential upside in the form of further cost cuts but it is looking increasingly unlikely.

That doesn’t change our view.

As mentioned above, the radio assets underpin the current market capitalisation. And NZME should generate a lot of free cash flow for shareholders. Its net working capital requirement (receivables less payables) is close to zero. Capital expenditure required to maintain the business is low, running at about half of its depreciation and amortisation.

This enables the board to have a dividend payout policy of 60–80% of profit. The midpoint of this range implies a dividend of NZ$0.08 per share, which equates to a dividend yield of 15% (fully imputed for New Zealand shareholders).

In a world of overpriced assets, it’s nice to find such value.

This blog post is an extract from our December quarterly report. Email [email protected] if you would like to be added to the distribution list. To watch all of the December 2016 quarterly report video analysis visit our YouTube Playlist.

2 thoughts on “Value Traps, the Media Sector and the Fund’s Newest Investment, NZME”

Steve Johnson @ForagerSteve
The old "don't worry, there's a second-half recovery coming". $A2M out this morning with a downgrade and a VERY str… https://t.co/SRRMdMHcq1
Share on