The Value of Cash

Forager’s two funds have quite high cash weightings today. It’s almost 28% in the Australian fund and 30% in the Forager International Shares Fund.

On our recent roadshow tour, many intelligent questions were asked about the current cash weightings. Is it reflective of our thoughts on value available in stockmarkets? Does it mean we expect an imminent downturn? Wouldn’t returns be better if the Fund was 100% invested all the time? Why should I invest in your funds today if a large part sits around doing nothing?

They’re good questions. I’ll answer most here, although Steve has promised to specifically address that last one in a post soon.

Yes, higher cash weightings are at least in part reflective of our opinion on value. As a base, we view anything around 10-15% cash as fully invested. A 30% weighting is telling you something.

When markets are frothier, we’re likely to do more selling than usual as more of our positions move from underpriced to fairly priced. A strong sell discipline is important to risk-adjusted returns over time.

The quality of ideas counts

The world isn’t devoid of good investment ideas. In the International Fund (my purview), we have been finding quite a few new investments recently.

A few years ago we could buy high-quality small cap businesses below 12 times earnings (see B&C Speakers and El.En. for example). The cheap stocks available today are more likely to be cyclical, lower quality and/or more complicated. These mispriced bets deserve a place in your portfolio. But they are not the sort of businesses to invest in heavily.

Absent low risk outright bargains, quality blue chip stocks bought at reasonable prices can be a useful hiding hole. They won’t shoot the lights out but they’ll do better than cash over time. The current International Fund portfolio contains a smattering, including Google owner Alphabet, Lloyds Bank and Baidu. A few more would be great. Despite a long list of targets, ‘at reasonable prices’ has been the sticking point.

Cash as a weapon

Which gets to the heart of our thoughts on the matter. Cash isn’t laziness but preparedness. It provides useful protection in falling markets. Perhaps more crucially, cash is a potent weapon if used correctly.

The International Fund’s cash exposure over the past 31 months is instructive. 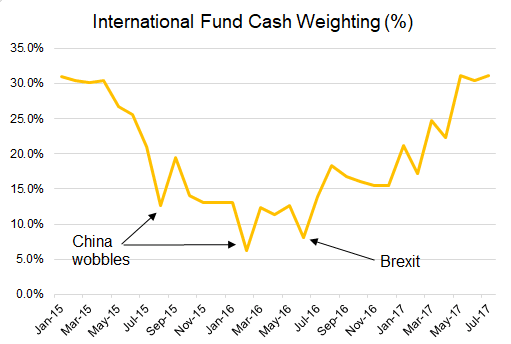 There have been three decent market dislocations over the past few years. Calendar year 2015 started with high cash balances, similar levels to what’s in the portfolio today. The first big ruction came around August 2015, sparked by fears in China but it quickly spread to be one of the bigger downturns in Western markets over the past five years. Our cash weighting fell from 30% to below 15% in a few months as the Fund loaded up on good investment ideas.

An even bigger China wobble came in the first months of 2016. Cash holdings dipped below 3% at one stage in early-February. A month later, as panic subsided and some of the holdings reached fair value, it was back at 10%.

Then Brexit happened, and the Fund pounced on a few more opportunities.

At 30 June 2015, we didn’t know what the future would bring. But the prospects available at the time weren’t compelling. And having a large cash weighting allowed the Fund to make the most of the pessimism that soon emerged.

Over the following year the Fund bought El.En which subsequently tripled and Sotheby’s which almost doubled before we sold it. We bought into South32 around $1.50 in July 2015 and doubled down below $1.00 in early 2016. The Fund bought Cable One and sold out for a 50% profit in barely a year.

These investments were crucial contributors to the excellent results over the past few years. And had the Fund gone into that period without substantial firepower in the form of cash, it’s most unlikely results would have been as good. Selling cheap to buy cheaper is much tougher game than raiding the bank account when the bargains emerge.

High average cash balances over time aren’t lazy unless they’re permanent. If we prove prescient and nimble enough to put that cash to work at times of volatility and fear, even if for only short periods of time, it will prove worthwhile. It’s a litmus test you might want to apply to us and other cash-hogging money managers in the years ahead. Is that cash put to work occasionally? Do the stocks bought in those periods add meaningfully to returns?

We don’t know what the future brings or whether a downturn is imminent. But fear and volatility haven’t been permanently banished. The currently high cash weight in both Funds is preparation for when such negativity returns.

7 thoughts on “The Value of Cash”