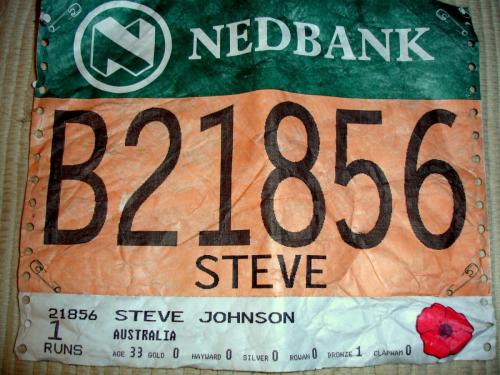 On a Comrades race bib, it tells you how many Comrades the runner has completed. Inexperienced runners, like myself, seek out those with double digits on their bib for advice. There’s a consistent theme from every single one of them: ‘take the first half easy’;  ‘give the climbs the respect they deserve or you’ll pay for it at the back end’; ‘make sure you take more than half your target time to reach half way’.

I’d heard and read the same advice dozens of times and told everyone that my plan was to do exactly that. Take it very slow to the 70km mark, and see what’s left in the tank.

‘What am I doing here?’ I thought to myself as I arrived at Drummond, half way in the 2011 Comrades Marathon, 20 minutes ahead of schedule. I had slowed down every time my watch beeped a km that was too fast, I had walked some of the hills, I had told people mid race how I was sticking to my plan. And here I was through 44km having averaged 30 seconds per km faster than I wanted to. That’s not a bit ahead of schedule, it is literally miles ahead.

I paid the price, of course. The first half took me four hours and two minutes. The second half five hours 20 minutes.

Patience is one of those psychological attributes that is easier to acknowledge than it is to execute. We all know that Warren Buffett’s punch card is a wonderful idea – that you would be much more successful as an investor if you limited yourself to 20 investments throughout your lifetime. But how many of us can exercise such restraint? Fear of missing out, the thrill of successful stock selection and the desire to ‘do something’ all conspire against us.

Every single marathon runner plans on pacing themselves appropriately but very few manage to pull it off. The adrenalin and excitement of the day makes you feel like you are running slow, no matter how often your watch tells you your are not.

I was somewhat philosophical as I struggled to overcome cramps, watched my average pace rise and saw the old-timers cruise on past. Some lessons just have to be learned the hard way.

My total time was a still respectable 9 hours 20 minutes, which placed me 2672nd out of approximately 14,000 starters. Many thanks for the generous donations. We’ve raised almost $8,000, which is enough to put 25 girls through a Camfed education program.