We’ve discussed previously how television has been by far the most resilient form of the ‘old media’, the predominant forms of mass communication before the dawn of the internet.

For more than four decades television has had the ability to deliver the vast quantities of ‘eyeballs’ that advertisers crave, and its effectiveness hasn’t yet been dimmed. This year the grand finale of The Voice delivered Channel 9 an astonishing 4.5 million viewers, and the announcement of the My Kitchen Rules winner delivered Channel 7 a further 2.9 million.

The demand for television remains enormous despite the rise of the internet and tablet computers. According to The Cross Platform Report by researcher Nielsen, United States’ viewers still spend around four and a half hours per day watching television, barely down from record highs.

But the passage of time and the progress of technology are irrepressible, and I’m going to argue that the Australian television broadcasters are at the tipping point newspapers reached 3-5 years ago. While new technology is already eating away at the margins, faster broadband speeds will demolish the business model altogether. 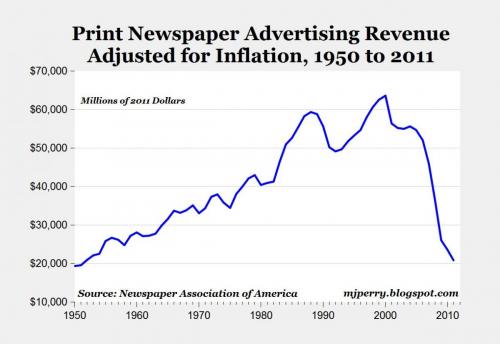 High speed internet, capable of delivering high quality video on demand is fast becoming the norm in developed countries. According to a report commissioned by the UK Office of Communications,  ‘smart’ or ‘connected’ television sets, those with broadband connections capable of streaming on-demand video (for example through an Xbox ), will be present in the majority of homes within the next decade. Australians are early adopters of modern technology, so you can expect smart TVs to roll out as quickly as the NBN (granted, that looks unlikely to be breakneck speed, but you would think they can manage it within a decade).

All this points to ‘digital convergence’, the idea that users will soon be able to access information and entertainment in any form, on any device they wish. Just as you can now read a newspaper on your computer, soon people will be en-masse streaming video content on their TV from whichever provider they choose. Today’s technologies and interfaces are still fiddly, but you can be sure they will improve. And they are increasingly integrated with social media, particularly Facebook and Twitter.

This might not seem a big deal but, once streaming on demand is ubiquitous, free-to-air TV’s last bastion of profitability will be the lazy viewer. Most of us couldn’t be bothered searching for a new program to watch. We just want to crash in front of the TV and rely on the box to serve us satisfying programs. Ok, entirely unsatisfying most of the time. But most people can’t be bothered looking for something else.

The internet can do a much better job of satisfying our cravings without demanding effort. Spotify already tells me what music my friends are listening to and has introduced me to many artists I had never heard of. Once your television starts telling you what’s popular amongst friends and like minded people, goodbye to sloth profits for the free-to-air television networks.

Will it take three years? Five or ten perhaps? History suggests destructive change takes longer to take hold than most pundits expect, but the demolition itself is surprisingly fast. The technology is ready. We’re ready. All we’re waiting for is faster internet speeds. And that’s about to arrive.

Video may not have killed the radio star. But the NBN is about to kill the television station.