Message to Foster’s: You Don’t Get Paid Twice 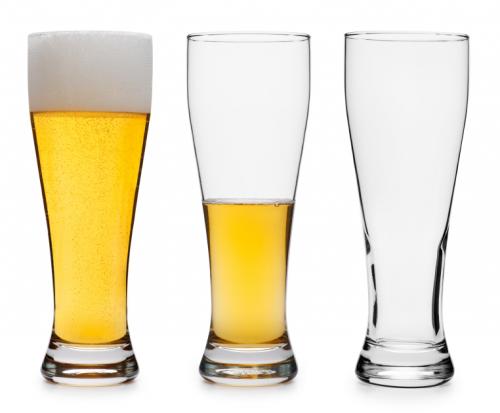 ‘Yeah, it might be a great business, but you don’t want to pay for quality twice’.

So James Carlisle, former editor of Intelligent Investor, told me many a time. And many a time he was right.

The problem with paying high multiples for great businesses is that the strength of a business and the quality of its management team is already included in a company’s current level of profitability. To justify also paying a high multiple of those already high profits, you need to be sure that the business quality or management team can be leveraged to increase those profits further in future.

It is a pertinent point for Foster’s shareholders to consider. There’s no doubt they own a good business – the return on equity of 124% says it all. The question is whether anyone is going to pay for that quality twice.

The bid from SABMiller is $4.90 per share, 19 times last year’s underlying earnings per share of 25.6 cents. All of those earnings are currently being paid out as dividends, representing a dividend yield of 5%. Assuming you want a return of 12%, you need 7% annual profit growth to justify the SABMiller price. You need more to justify the board’s declaration that the bid ‘significantly undervalues the company’.

So where is this growth going to come from? Given they are paying all the cash out as dividends, it isn’t going to come from acquisitions or capital investments. The growth will have to be organic, and that can happen via one or a combination of the following factors:

2.       Foster’s increases its market share in a stable or growing overall market; or

3.       Foster’s increases its margin, so that shareholders keep a larger share of the revenue.

A growing beer market used to be a given. The Australian population grew and the average beer consumed per person also gradually increased. Foster’s would have you believe that the current beer market woes are simply a blip in that same long term trend. It had this to say in its recent full-year profit release:

‘Volume in the Australian beer market declined 6% driven by the challenging consumer environment and cold and wet weather throughout fiscal 2011. Higher interest rates and a rising household savings ratio resulted in lower disposable income for consumers during the year. Lower household disposable income is believed to have contributed over 3 percentage points to beer category decline’

The ‘3 percentage points’ was scientifically referenced to a footnote stating that it is a ‘management estimate’, but let’s give them the benefit of the doubt. What does the other 3% relate to?

Perhaps there is something cyclical at play. Weather, in particular, has a significant impact on beer consumption and the most recent summer was a relatively cool one. But there are also structural factors at play. I am an exception to the trend – my father is a non-drinker – but for the most part my friends are drinking substantially less beer than our father’s generation. Partly we are drinking more wine. For the most part we are simply drinking less (see graphs below from the ABS). The ageing population is not going to be a good trend for Foster’s. 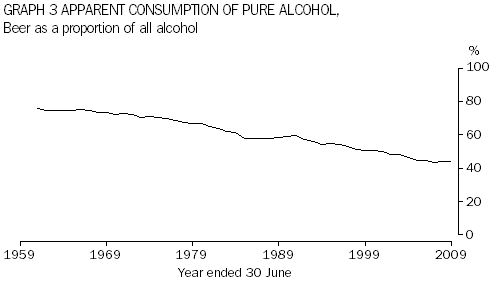 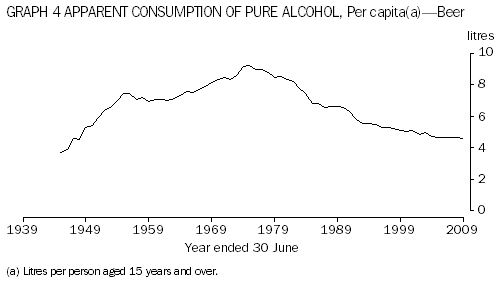 Next, can Foster’s increase its market share? Here I’m even more bearish that I am on the overall beer market. The trend away from traditional beers towards boutique and premium brands is gathering steam and is here to stay.

One of the factors Foster’s gave for its stabilising market share was increased ‘contract compliance’ measures. An article in the AFR the next day titled Craft Beers Tap Fosters Market explained that Foster’s often pays for pub fit-out in exchange for exclusivity at the bar. Publicans have been taking the cash, but don’t want to sell Foster’s beer, hence the need for enforcement.

Alistair Carragher, publican at the Great Northern pub in Melbourne, knocked back the potential for $20,000 in kit paid for by Foster’s, because ‘[craft beer] is where the market is at’ he told the AFR. It might be able to play this game for a few years to come but, like Billabong setting up its own retail stores because independent stores don’t want to sell its product, if the punters don’t want Fosters’ beer, contract enforcement is hardly a long-term solution.

So market growth looks hard to come by and market share increases even less likely. The final option is the one Foster’s has been using for the past decade to increase its profitability: use its dominant market position to consistently raise prices over and above inflation, or take an axe to costs. If it can’t increase the volume sold, it needs to increase the margin it makes from each stubby of beer.

It’s not hard to see why Foster’s has made such extraordinary returns on capital. With only two large producers (Lion Nathan being the other), a fragmented source of suppliers and even more fragmented customer base, Foster’s was able to grab a disproportionate share of industry profit. The extensive distribution network and economies of scale that come from producing 108 million cases of beer per year make it almost impossible for anyone else to profitably gain market share.

Some of those factors are still in place. Successful listed brewer Little World Breweries, which makes the popular Little Creatures boutique beers, isn’t generating anything like the returns per beer that Foster’s is. But it’s the bargaining power of Foster’s customers that has thrown a large spanner in the works.

The past decade has seen both Woolworths and Wesfarmers owned Coles establish dominant positions in the beer retailing market. Instead of dealing with thousands of independent pubs and bottle-shops, Foster’s is now faced with two retailing behemoths that have their own distribution network and dominant market positions. Neither are in the business of letting their suppliers eke out extraordinary profit margins. In fact, it often seems they aren’t in the business of letting their suppliers make a profit at all.

Even if Foster’s can cut costs, it’s hard to see them keeping the benefit. It seems certain that Foster’s will be earning lower margins a decade from today. Given the inherent advantages – beer brewing is a good business around the world – it will probably still be healthy. It just won’t be making the extraordinary margins currently enjoyed. 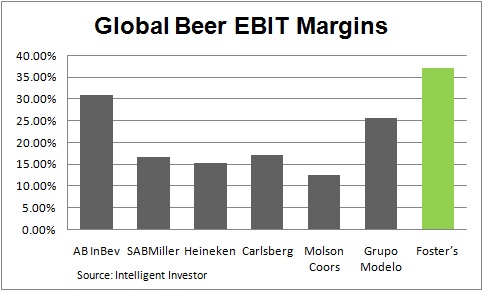 Perhaps the Foster’s board is simply fishing for a higher bid. They may well get one. The global beer industry is in the midst of another round of consolidation. Asahi recently paid NZ$1.5bn for New Zealand’s Independent Liquor and Kirin paid US$2.5bn for half of Brazil’s Shincariol. But the directors are playing a dangerous game.

The current offer price looks more than fair to me and, in the absence of a takeover, shareholders will be dependent on Foster’s growing its profitability. That looks nigh on impossible.