It's Time To Buy In The US

In the past 12 months I’ve been to Johannesburg, London, Vienna, Istanbul and Hong Kong. Based on what I’ve seen, Sydney is now one of the most expensive cities in the world.

Food, accommodation, property prices, transport ­­- you name it, it costs more here than almost anywhere else. Even the London Tube, which in 2002 cost me an hour’s Australian salary for one round trip, now costs roughly the same as Sydney’s vastly inferior CityRail network.

Most of us get paid Australian dollars and spend Australian dollars, so we don’t notice how expensive it is here until we travel overseas, meet a tourist or converse with an expat. A few weeks ago I met a new recruit at the University of New South Wales who had transferred from the US in June. He sold his house in Houston­ – four bedrooms, two bathrooms, double lock-up garage and hardwood floorboards for $US175,000. “It was ON LAND Steve”.

He was somewhat shocked that his pile of Greenbacks won’t buy him a shoe box in Sydney.

So is the Aussie Dollar overvalued?

Probably. Currencies are impossible to value with any degree of certainty but some form of purchasing power parity should hold. In two relatively open economies with floating exchange rates, the comparative cost of tradeable items should be somewhat similar.

Whether the Aussie is overvalued or not, however, there are a number of good reasons for getting a decent chunk of our assets out of Australian dollars. More specifically, there are even better reasons for shifting your portfolio from being fully hitched to the Australian economy to a more balanced exposure between Australia and the US.

We’re all on the China bandwagon

The two do not necessarily go hand in hand. China’s past decade of growth has been generated by an extraordinarily high percentage of GDP devoted to investment.

Throughout the Japanese economy’s transition to first world status, investment as a percentage of GDP topped out at 37% in 1973 and in South Korea it hit 39% in 1991. In China, the ratio is currently north of 40% and rising (see graph below). 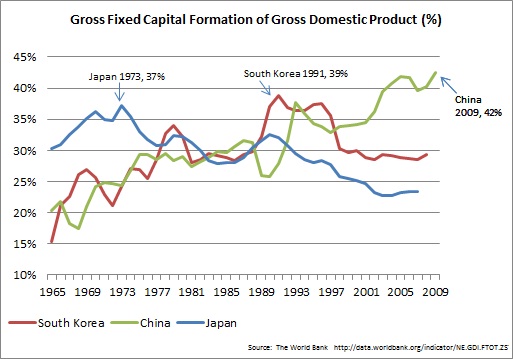 There is a case for a debt-induced crisis in China but it is also quite conceivable that the Chinese economy continues to grow, just like Japan and Korea did, while its demand for resources wanes thanks to a structural shift away from investment and towards consumption. Either scenario would be bad for Australia.

The problem is not so much stocks with direct exposure to Chinese demand – that is a manageable risk in the context of a portfolio. The problem is that the whole Australian economy is hitched to the China bandwagon.

Take McMillan Shakespeare for example. This company provides salary packaging services to public health sector employees using a tax loophole to claim all sorts of out-of-pockets as pre-tax expenses (numerous friends of mine have paid for their weddings pre tax).

You might think this stock is relatively China safe. But it doesn’t take too much imagination to contemplate a commodities bust having a negative impact. The government finances would come under pressure and, as a consequence, the government could shut the loophole as suggested in the recent Henry review of taxation. It’s a stretch, but it’s not implausible.

Unemployment, the government’s financial position, asset prices and consumer spending are all only one or two steps removed from the China boom.

With the dollar carrying so much purchasing power, the time is perfect to do something about it.

Getting long the US

My preference is for the US. The country’s short and long-term problems have been well documented: a fiscal deficit in excess of 10% of GDP; short-term interest rates at zero; a central bank hell bent on printing money to drive long-term interest rates down; official unemployment stuck stubbornly high at 9.8%; and legislated heath care obligations that make the government deficits seem intractable.

What the US economy has, however, is productivity growth. If the US economy can grow, meeting its obligations will be straight forward. Monetary and fiscal policy can shift consumption and production from one period to the next but real long-term growth comes from productivity – producing more goods and services given the same amount of labour.

As you can see in the graph below, US productivity has increased right through the crisis. It is this, more than anything else, that sets the US economy apart from the likes of Greece, Ireland, Portugal and Spain. 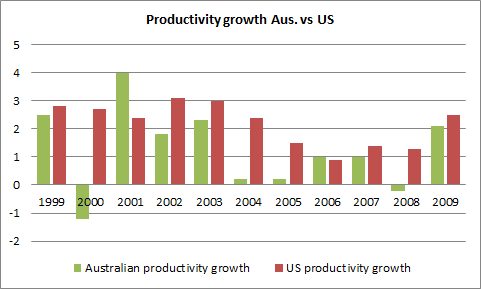 The other advantage the US has is that its electorate is not as enamoured with government as the Europeans are. The success of the Tea Party Movement in November’s congressional elections reflects a deep-seated aversion to big government and big deficits. Sure, most of the policy ideas are harebrained and narrow minded. But their popularity reflects a desire amongst the population to do something about their long-term structural issues. That is something I don’t see in Europe.

So I think the US remains one of the world’s more attractive places to invest.  Right now, it is going through a very typical deleveraging-induced malaise. Economic growth will be below par until the excess debt from the early naughties is purged from the system.

According to a McKinsey special report on past episodes of Debt and Deleveraging, this process typically takes seven years. The weak US dollar is undoubtedly speeding the process and there are early signs that the debt reduction is coming to an end. For the first time in more than two years, total lending in the US increased in November.

Moreover, the big US blue chips are cheap, and the best way to protect yourself against inflation. Some of the most respected US investors have said so, including Jim Grant, Jeremy Grantham and (once respected) Bill Miller. It’s hard to argue with the Walmart bulls when it’s trading on 12 times earnings, and we can go one better than them by paying with our omnipotent Aussie dollars.

There is a window of opportunity here to make substantial portfolio changes. Our currency is carrying a great deal of purchasing power. By doing nothing we are exposing ourselves to far too much China risk. And there are plenty of US assets available at attractive prices.

This window might stay open a long time. It might open wider – there’s nothing to say the exchange rate can’t go to $1.20. But it might also shut.

I’m making the most of the opportunity while it’s here.

Note: We are somewhat restricted because our mandate limits us to ASX-listed stocks. But we have 20% of the Value Fund invested in US commercial property trading at a large discount to asset value (via ASX listed trusts), are giving serious consideration to QBE Insurance and News Corporation and searching for others that are not correlated with resource prices or the domestic economy. Private investors can also invest direct or via Exchange Traded Funds.