Investing in an Oil Price Recovery

The oil price’s stunning decline of the past four years from above US$100 per barrel to below US$50 has wreaked havoc across the oil industry globally, providing investors with a prospective place to look for cheap stocks. While internationally there were, and still are, plenty of them, we are not so lucky in Australia. The fortune of our local energy companies relies more on the price of gas than that of oil.

In the Australian stockmarket, it’s easier to gain exposure to a recovery in the oil price through oil services companies. As pointed out in the January monthly report, the Fund holds four stocks that should benefit indirectly from a higher oil price. These are Cardno (CDD), GR Engineering (GNG), LogiCamms (LCM) and Matrix Composites & Engineering (MCE). The Fund also owned shares in MMA Offshore (MRM). We sold them last year, adding to the existing investment in Matrix.

MMA owns a fleet of vessels that it charters to the offshore oil industry mainly in Western Australia. These vessels are used to tow and handle anchors for drill rigs, construction vessels and barges. They are also used to transport personnel and supplies to and from offshore oil platforms.

At the time of the Fund’s investment in early 2015, MMA had an enterprise value of $700m and $1.3bn of tangible assets mostly in the form of relatively new vessels with an expected life of at least 20 years. While a discount to these assets was warranted due to a chronic oversupply of such type of vessels, we thought that a nearly 50% discount was too big.

On the other hand, Matrix manufactures riser buoyancy systems – cylinders of plastic foam that help to keep the pipes connecting drilling vessels in position on the bottom of the sea. After the oil price collapsed, demand for new drilling ships, and consequently Matrix’s products, evaporated. The company’s order book shrunk from US$110m in December 2012 to US$22m in December 2016.

The Fund started buying Matrix shares in late 2015. The company then had an enterprise value of only $45m but tangible assets of more than $150m. The bulk of these were the result of years of investment, building the world’s largest and most efficient manufacturing facility of its kind. While the dollar value of this facility was, and still remains, tightly linked to the state of the oil market, we thought it represented a strategic asset that no competitor could justify nor afford to replicate. 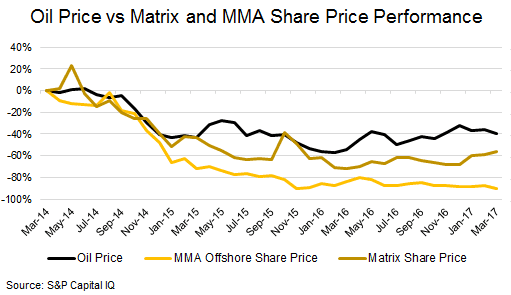 Doubling down on Matrix

While both Matrix and MMA stand to benefit significantly from a recovery in the oil price, the risk-return profile of the two investments has diverged meaningfully. While Matrix repaid all of its debt, MMA’s financial position deteriorated. The latter failed to sell enough vessels to reduce its debt burden, which at the end of 2016 stood at $400m, four times higher than its market capitalisation. So, Matrix’s ability to wait for an oil price recovery was enhanced, while MMA’s decreased notably. Importantly too, Matrix’s management can now focus on operating its business as efficiently as possible. MMA’s management doesn’t have this luxury, faced with ongoing negotiations with bankers while trying to run a business.

While we sold MMA shares at a significant loss, this could prove to be a good decision. MMA’s failure to sell its boats at a small fraction of the price it paid only a few years ago highlighted how greatly we underestimated the level of oversupply in that market. It might be hard for MMA to earn a decent return on its discounted assets even if the industry improves meaningfully. On the other hand, Matrix’s industry has become more attractive with one of its main competitors going broke and another one losing credibility with shipyards due to quality control issues. As the last player standing, Matrix should be able to earn good returns once the industry turns.

Despite these contrasting developments, the share price of both companies kept falling throughout most of 2016. So much so that we purchased additional shares in Matrix at a discount to even its current tangible asset backing of $0.44 per share. This price implied no value for its leading manufacturing facility. It could be a five year wait for a meaningful turnaround in Matrix’s business, but we expect it to be a worthwhile wait.

This blog post is an extract from our March 2017 quarterly report which will be released in the coming days. If you would like to be added to the distribution list, please sign up here.

11 thoughts on “Investing in an Oil Price Recovery”