I Can Feel A Stimulus Coming On

Apologies to those who didn’t grow up in the Eastern states. Matt tells me that he’s never heard the advertising jingle I can feel a XXXX coming on. It works for me though, I get the feeling the Chinese are working on something big.

The Chinese economy is being buffeted by two unrelated winds. The first is Europe’s woes and the second is an inert US economy. Both are proving a serious drag on China’s export growth. Export and import growth have slowed dramatically and net exports are expected to contribute less than 3% of GDP this year, down from 7% in 2008.

A property crash is a big issue in any country. It is especially problematic in China, where fixed investment comprises more than 50% of GDP and, according to UBS, residential property investment accounts for more than 20% of fixed asset investment.

If the investment part of GDP growth takes a hit and exports get smashed, China’s 9% growth rates are going to get annihilated.

So what will they do? There’s not much they can do about Europe, apart from hurling platitudes across the continent (China, like Germany, seems to think that the whole world should do what they do and run trade surpluses), nor is there much they can do to inject life into the sluggish US economy.

Investment on the other hand the Chinese authorities can do something about. In 2009, they rescued their economy from the global recession by stimulating the investing part of the equation. Not surprisingly, it looks like they are about to give it another shot. 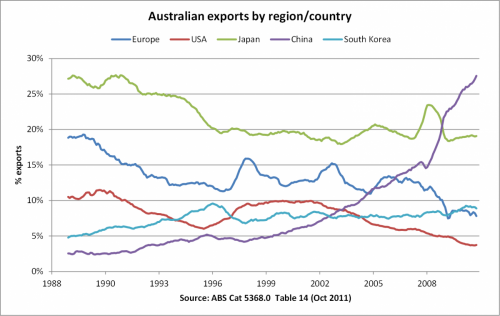 As regular Bristlemouth readers will know, I’ve been petrified about the consequences of China’s misallocated investment boom, and positioned accordingly, for a long time. Perversely, Europe’s troubles may delay the day of reckoning, and make it all the more painful.

PS I probably have the most ‘anti China’ portfolio of any ASX-focused fund manager. That graph still scares the life out of me.