I laid out the case for why I think this stock is cheap in the latest Value Fund Quarterly Update. To summarise, electricity retailers will need more renewable capacity over the next nine years (see graph below). To get it, they will need to either build renewable generation capacity themselves, sign an agreement with a third party that guarantees that third party an acceptable return on their capital or buy existing capacity. Whichever way it unfolds, Infigen should be worth something like the replacement cost of its assets. 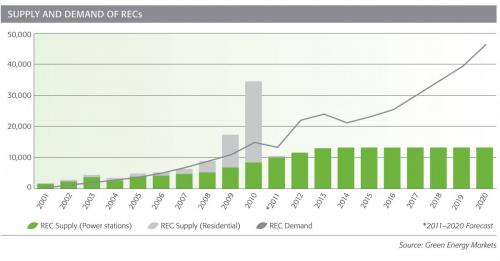 The business I can explain. What’s happening with the share price, however, has me baffled.

On 31 January it closed at $0.495. It hit a low of $0.28 during Japan’s earthquake crisis (I’m still trying to build a bridge between Japanese earthquake and Australian wind farms – the only conclusion I have been able to make is that a nuclear meltdown should be slightly positive?).

For the past few months, daily 5% moves have been the norm. It’s up 10% this morning and back to $0.47. This is not some two-penny stock, the current market capitalisation is $360m, and there are typically 60-100 million securities traded per month.

The press have suggested a potential takeover. It would make sense given what I’ve said above but why would you put it in the paper if that was your plan?

And if the board knows anything about it, how is The Children’s Investment Fund still buying on market given they have two directors on the board? Yesterday they announced they have increased their stake to 25%. Presumably this is under the creep provisions which allow the purchase of an additional 3% per annum without triggering takeover requirements but it suggests no one is talking to them about a takeover.

I have no idea what’s going on but the magnitude of the price movements and the volume traded are odd. No doubt they’re due another ‘please explain’ from the ASX and, as per usual, I’m sure the directors know nothing.