Prior to the listing of of the Forager Australian Shares Fund, I invested $200 each month via direct debit. In my mind’s eye I could see my wealth compounding over decades as my regular savings combined with the power of compound interest.

That fund is now closed to new money. Of course, I could always use additional savings to buy more units on the ASX via my broker instead. But the investment decision is muddled due to the fact that the Fund now has two important prices that can diverge. Indeed, they have diverged.

First, there’s the net asset value or NAV. This is calculated by adding up the value of all the Fund’s investments and cash, subtracting any accrued management and performance fees, then dividing it by the number of units on issue. It effectively represents the underlying value of what investors in the Fund own for each unit they hold.

We report the NAV every business day to the ASX – currently it stands at $1.73 per unit. Before listing on the ASX, my monthly investments were added to the Fund at the NAV and hence my future return matched the Fund’s future return, setting aside the impact of tax.

Since listing the Fund late last year on the ASX under the code FOR, we now have a second price, which is the market price for units. That price is set on the ASX like any other stock – by the coming together of buyers and sellers. The market price of the Fund’s units has risen substantially due to there being more demand than supply. As a result the Fund’s market price of $2.02 is approximately 17% higher than the NAV.

On such figures, there is a real chance that any additional investments I make today at the market price earns a lower return than the underlying fund. That potentially upsets my original game plan, so I’ve recently gone back to the drawing board to analyse the impact on future investment returns.

Can I afford to buy at a premium?

The Fund has returned almost 15% per year after all fees and costs since inception in 2009. This is impressive compared the Australian market’s performance of 7.3% per year over the same period. But conditions have been generally favourable and I think it’s prudent to expect somewhat lower returns over the long term.

For the sake of conservatism and working with a nice, round number, I’ve picked an assumed average future return of 10% per year. But now we return to the thorny issue of the current premium on the ASX.

If the premium were to remain constant over time, paying it would make no difference. The black line in the chart below reflects this scenario. Yet if the premium changes, performance will vary. But the effect is most pronounced in the short term. As the years pass, the impact of the premium drops away. This is because the ‘cost’ of the premium is spread out over a greater number of years. 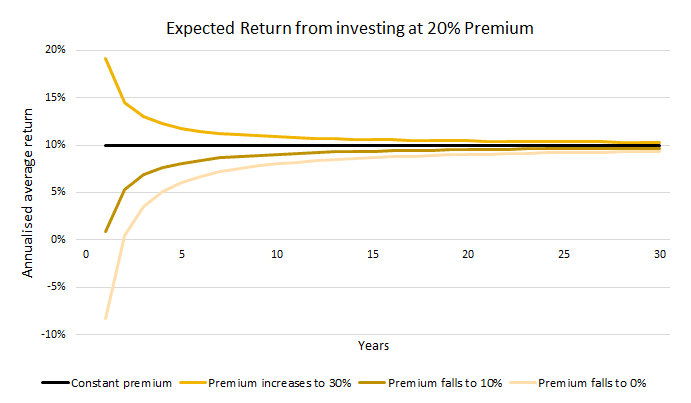 Increasing the holding period to thirty years would make the returns 9.7%, 9.3% and 10.3% respectively in the three scenarios above. Not much different to the 10% I would expect to average from an investment at the NAV. Given that my investment horizon is rather long, paying even a 20% premium today doesn’t seem to hurt my chances of building wealth through the Fund much.

There is a problem with this analysis though. Internal rate of return (IRR) calculations assume that interim cash flows can be reinvested at the IRR. In other words, the analysis assumes that I will be able to reinvest any distributions at the NAV and therefore earn a 10% return on the distributions. Unfortunately, this is unlikely if the Fund continues to perform well.

The Fund’s ability to invest at the smaller end of the market, where competition is less intense, has been one key to its success. As Alex Shevelev will expand on in a coming post, size kills in funds management. If the Fund continues to generate good returns, it will soon grow to $200m. This is the amount of money Forager estimates we can manage in the Australian market using our current approach without hurting performance. Upon reaching that ceiling, the Distribution Reinvestment Plan (DRP) is likely to be suspended, hence preventing distributions from being reinvested at the NAV. With no opportunity to reinvest distributions, an investment at a 20% premium will yield an average expected return of 8.3% over the long term. Even if this is still better than the market return, paying the premium permanently precludes the return approaching the 10% mark.

So there seems no clear answer. Provided the Fund continues to outperform the market, investors might still do well over a long holding period. Nonetheless while such a large premium exists, I’ve decided I will not use my regular savings to purchase more units.

But if the history of closed-end funds is any guide, it’s likely that I’ll get a chance in the future to buy units at NAV. Perhaps even at a discount. While it’s common for new closed-end funds to trade at a premium for a while, over time unit prices tend to fluctuate wildly. Like any stock, funds can go through periods of popularity and its opposite.

While there’s no guarantee that the Fund will ever trade back at NAV, I’m happy to wait for the possibility. In the meantime, I’ve switched my $200 monthly investment to the Forager International Shares Fund. While Forager has a shorter track record in foreign markets, I’m confident the approach which has served us well here in Australia is also valid overseas.