Of late we’ve been looking at many service companies, which are currently amongst the most unloved in the market. Though many trade at very modest earnings multiples, we’ve found few that have excited us.

The difficulty is that these businesses are often very fragile. During boom times they mimic high quality businesses with attractive returns on equity and revenue growth. But when the tide turns, it's hard to find much tangible business worth on which to pin a valuation. Perhaps the most striking example of this vulnerability is constructor Forge Group, which has this morning resumed traing after securing a rescue package from ANZ.

How it ended up in this position is something of a puzzle. At 30 June Forge had minimal borrowings of $26m, compared to $115m earnings before interest, tax, depreciation and amortisation, and $213m of net assets – most of which were tangible and almost half of which was cash. Operating profit of $94m covered their interest bill of $4.8m a very comfortable 19 times last year. Before it ceased trading Forge had a market capitalisation of $360m, a 70% excess to its net assets.

This morning Forge's market capitalisation dipped below $30m before rallying to around $60m. Two power station projects have racked up $127m losses, pretty dire stuff when you consider the entire segment only did $495m revenue last year.

Project blow-ups like this are unfortunately very difficult to foresee for an arms-length investor (though I noticed previous substantial holder Clough timed its exit nicely). But there are a few hints in the annual report as to the potential flakiness of the business, an apparently strong balance sheet notwithstanding.

Firstly the company does a lot of engineering, procurement and construction (EPC) work. These are mostly done as lump-sum contracts, meaning Forge bears the risk of cost blow outs. There’s also $157m in bank guarantees, not a tangible liability but a tacit admission that the company is entering into risky contracts that require financial backing.

Note 12 to the financial statements shows that Forge’s ‘work in progress’ asset increased from $11m to $150m last year. This represents revenue that Forge has recognised, but not only has it not yet received in cash, it isn’t actually entitled to bill for it yet. It’s low quality revenue, being open to significant management discretion and not yet agreed to or even seen by the client. The amount of ‘work in progress’ revenue recognised in 2013 exceeds Forge’s entire operating profit. If it has been misstated, a good chunk of the company’s 'earnings' could be fictional. The fact that so much revenue is ‘work in progress’ is reflected in the company's poor operating cash flow of $18m, significantly less than net profit of $63m and not sufficient to cover capital expenditure of $19m.

The segment split is also worrying. The power division shows huge revenue increases, from $266m to $495m, but profit before tax down 50% to $13m. Assets attributed to the power segment increased from $65m to $168m, suggesting working capital had taken a hit. 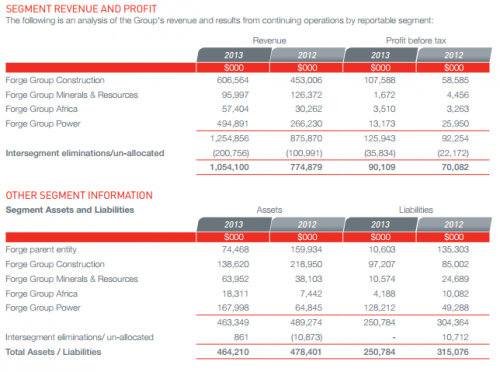 There’s no smoking gun, but if you know the signs there are enough snippets to cause concern, and if not steer you clear of the investment completely, at least caution you to limit your position size. You'd have seen similar issues if you looked at the historical accounts of Hastie Group or Norfolk before they ran into strife. In these companies, more than most, it pays to look past the headline numbers and dig into the detail of the results.

Dislaimer: We bought some Forge shares this morning and have a call with the company this afternoon. We have no intention of telling anyone our thoughts on valuation.