Comrades 2011: Give Some of Your RHG to Charity

Three weeks ago I was eating some tapas with a colleague in Victoria Street Darlinghurst, an inner-city suburb of Sydney.

We were chatting about the RHG saga and trying to fathom Chairman John Kinghorn’s motives. Why would you try and short-change shareholders when you are already one of Australia’s richest people? I looked up from the table and thought I was having hallucinations. A massive blue billboard had been erected out the front of a construction site across the road: 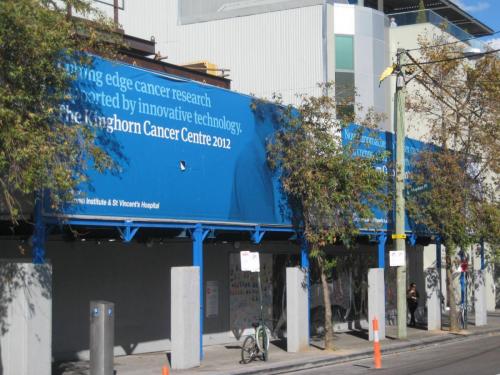 I googled it straight away and it is indeed the same John Kinghorn and he has indeed funded a large chunk of a new cancer research centre attached to St Vincent’s Hospital. The $100m facility was seeded with a $25m grant from the Kinghorn charitable trust.

I’m no closer to understanding what makes him tick. But I figure the least we can do is put a portion of our profits towards a good cause too.

Which brings us to next week. In six days’ time I’ll be embarking on the biggest race of my life. The 2011 Comrades Marathon starts its 87km journey in Durban on the east coast of South Africa. It winds its way up over running’s version of The Big Five ­– Cowies Hill, Fields Hill, Botha’s Hill, the monster Inchanga and Polly Shorts – and finishes at Petermaritzburg, some 700m above sea level. It’s going to be a long day but I’ve had my best preparation ever, and am ready to give it my all.

I can’t say I run for charity. I run because I love it. But I do like to use my running to raise awareness of useful causes and my choice of charity this year is Camfed, a US charity dedicated to educating girls in sub-Saharan Africa. I think what they have achieved is incredible.

You can read all about it on the website but, crucially for me, 90% of the money they collect goes directly to where it’s needed (they spend 7% on fundraising and 3% on administration). And what they do works. Their research shows that educated girls:

I want to raise $10,000, which will put 30 girls through a Camfed educational program. It’s no Kinghorn Cancer Centre but it would be great if you could help.

Click here to donate and, if you’d like to follow my progress on Sunday, we’ll be providing updates at www.twitter.com/intinvfunds. My ‘plan’ is to finish in less than 9 hours, which would be 10:30pm on Sunday afternoon, Australian Eastern Standard Time.