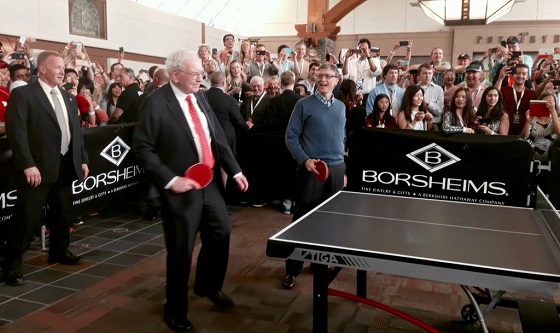 Every year, thousands of people across the globe flock to the small city of Omaha, Nebraska for a few days of festivities thrown by Berkshire Hathaway. This year marked the 50th anniversary since Warren Buffett took control of the failing textile mill and Forager's Chris Ten Berge joined more than 40,000 people at the annual meeting come celebration.

It was only a matter of time before I made the pilgrimage to the Omaha in early May this year, as I figured that at the ages of 84 and 91, Buffett and Munger were unlikely to make it to Berkshire’s 100th anniversary.

As remarkable as it is to run a company for 50 years and attract such a large audience to a small city, I think the most impressive thing is the financial returns Buffett and Munger have delivered – since 1965 to the end of 2014, Berkshire’s share price has compounded at 21.6% annually. This translates to a total gain of 1,826,163%. Hard to comprehend what that percentage means? It means that $1000 would have turned into more than $18 million. This year’s theme was ’50 Years of a Profitable Partnership’, a pretty big understatement if you ask me.

Saturday was the main event where everyone crowded into the CenturyLink Centre to listen to the pair answer questions on business and life for six hours. What surprised me the most was how sharp their minds were – at the ripe old age of 20 I was struggling to stay fully focused at times during the long Q&A session. Perhaps I can blame jet lag and my 3am start to get to the front of the queue, but Buffett and Munger are clearly still at the top of their game.

I’ll skip the rest of the details of the trip, but I’ll say that it was a highly enjoyable and eye-opening journey that I would recommend to anyone who admires the pair. Below are some of the most notable quotes that I took away from the Q&A (I cannot assure you that these are verbatim, but the message should be clear in any case):

‘If people weren’t so often wrong, we wouldn’t be so rich’ – Munger. This is essentially the core philosophy of value investing, which is detecting mispriced securities (i.e. when others are wrong).

‘Berkshire’s culture runs as deep as any large company. Culture is everything at Berkshire.’ – Buffett. It’s an often under-appreciated aspect of analysing businesses but can often lead to spectacular success as it has at Berkshire, or blow ups such as Enron.

‘It’s dishonourable to stay stupider than you need to be’ – Munger. Both Buffett and Munger attribute much of their success to continuous learning throughout their lifetime, primarily through reading books voraciously. Evidently Munger feels quite strongly about its importance.

‘We think any company that has an economist has one employee too many.’ – Buffett. The two talked for a while on the futility of making economic predictions, instead taking a humbler approach that Munger describes as ’we’re just swimming all the time and we’ll let the tide take care of itself’.

‘The idea of multitasking my way to glory has never occurred to me’ – Munger. It’s an increasing habit in today’s world to multitask, but some research suggests that it reduces productivity dramatically and even temporarily lowers your IQ.

‘The whole thing in business is being open to the ideas that may come along’ – Buffett. It’s easy for investors to automatically shun certain businesses, either because of a bad past experience or due its unpopularity with other investors. I know myself that it’s tempting to jump to conclusions sometimes, but it’s often these sorts of opportunities that are the hidden gems.

‘I’ve never had any business school training, why should you have it?’ – Munger. I’m currently in my second year of business school and have to agree with his scepticism as the finance academics are still teaching many useless theories.

‘There is no Forbes 400 in the graveyard’ – Buffett. It might be a humorous statement, but unfortunately many people who are already wealthy take their obsession with money a bit too far and end up rather miserable.

‘Hardly anything is more important than behaving well as you go through life’ – Munger. While upholding a good reputation has no doubt helped Buffett and Munger in their personal lives, it has helped enormously in business as they’ve attracted a bunch of very talented managers at Berkshire due to their integrity.

Chris Ten Berge works a day a week for Forager while undertaking his university studies. He's a big fan of Buffett and a value investing enthusiast.

Gareth Brown @forager_gareth
SYD: When did you buy and what did you pay? https://t.co/OzGeXVs3Uo
Share on