May Day is an exasperating time to be a free market libertarian living in one of the reddest part of a very red town (red meaning socialist, not Republican). And it’s not just the fact that I have to work while everyone else gets a day off.

By Gareth Brown in our one-man Vienna office

Tag der Arbeit (Labour Day) started as an ancient May Day spring festival in Europe, and one can still see giant maypoles all over the (conservative-leaning) countryside at this time of year. But, for more than 100 years, the day has been one of international solidarity among workers. It continues a tradition started in Chicago when a union decided that, from 1 May 1884, workers’ days would be a maximum 8 hours long—setting off a long and unfortunately often bloody battle. 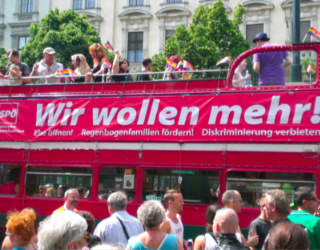 I’m all for the rights of workers and for their right to bargain collectively when it suits, as long as individual members are free to join or abstain without threatening their job prospects or safety in any way. Our rights as workers are likely far superior to where they’d have been if not for the often extremely brave striking workers of yesteryear.

But, at least from an outsider’s perspective, Tag der Arbeit in Vienna is no longer about working rights, I’d be surprised if half the protesters have jobs. This is a political movement, a voting bloc sending a clear message to governments, not employers.

On the day, red shirt-wearing marchers emerge mainly from their city-sponsored housing (a whopping 60% of Viennese live in subsidised housing, with almost 1-in-3 in an extremely cheap or free council flat). Some are young workers and students, many are retired (here, that can be surprisingly young). They congregate out front of their heavily subsidised housing, down the road from their free hospital and up the road from their free university. They take the subsidised underground to the centre of town, and meet with thousands other red shirts. They often march under the banner of the SPÖ, the socialist party that has ruled Vienna (unbroken, I believe) since WWII.

At the risk of offending someone more knowledgeable on the nuances, the message seems crystal clear. The current benefits that flow from the city, the state and, increasingly, the continent, are not up for negotiation. And they want more.

Make no mistake, these people do not live like kings, they’re generally the city’s poorer half. And who am I to judge someone who wants a better life? My concern is, if they want more and they want it from government, who’s going to pay for it?

You see, like in Australia but more extremely, the tax burden falls disproportionately on the middle class in Europe. Really rich citizens, and there’s a lot of them in Austria, including Didi Mateschitz (Red Bull), Frank Stronach, the Flicks, Wlascheks, Porsches (yes, that family), Swarovskis, parts of the Rothschild family and some descendants of the Hapsburgs, would wisely have their income-producing assets mainly in corporate structures. And while I’m sure that the left-leaning parts of the national government would love to have a much higher corporate tax rate, corporations are mobile and wont to up and leave. The corporate tax rate is a fairly competitive 25%, and explains why families like the Flicks (of German origin) actually moved to Austria for a tax break. A low corporate tax rate is seen by both sides of politics as good for job creation in Austria, and it means someone like Mateschitz is unlikely to be paying an effective average tax rate much above 30%. The rich are doing fairly well in a global context.

The middle class, however, gets walloped. The top marginal income tax rate is 50%, and kicks in at annual earnings of just €60,000 (A$76,000). The rates on salary below €60,000 are also taxed more harshly than in Australia. Additionally, employees must also contribute directly towards their pension plan (no 9% on the top as in Australia) and there’s compulsory public health insurance. Then there’s a sales tax of 20% on almost all purchases. Citizens also incur a raft of quirky taxes, such as television tax and church tax (introduced, ironically, by Hitler). Catholics (the vast majority of the population) and Protestants automatically have 1.1% of wages paid directly to the church unless they deliberately leave, which means finding alternative arrangements for marriages and funerals, with afterlife consequences also threatened.

By the time a doctor, accountant, tractor dealer, microbiologist or funds manager pays income tax, church tax, compulsory insurance and sales tax on their living expenses, well over half of their earnings has gone to government. Facing such a burden, young people that might otherwise shoot for the stars instead don’t bother, don a red shirt and march on city hall. Or, like four of our friends, they move to America for a system more suited to their ambitions.

The emerging entitlements culture in Australia, which I mostly pin on John Howard, is a growing shame. But it’s nothing like you see in many parts of Europe. And it’s not just a socialist thing. Right-leaning rural constituents, particularly small farmers, have also been in on the gig for decades.

While the red shirts march for more, it’s becoming increasingly obvious that Europe cannot even afford its current entitlements system. And the tax system is a massive disincentive to those who might otherwise dig deeper and, in the process, help the continent out of its malaise. It’s also a huge disincentive to attracting skilled migrants (I’m here for love, not the tax system). Changing that entitlement culture, if even possible, is a long and very difficult road in a left-leaning democratic system. I suspect Europe’s underlying structural problems won’t be resolved anytime soon.