Stay Prepared for an Aussie Recession

We’re what the asset consultants would describe as ‘bottom up’ investors. That is, we value companies and we buy them when we think they are cheap. Macro, or ‘top down’ investors look at the big picture first. Armed with a theme, they then find stocks that will help them profit if the world plays out the way they expect.

Obviously a top down investor still puts a lot of work into the individual stocks they end up buying. And a bottom up investor should – indeed must – put a lot of time and effort into understanding the macro environment a company operates in and how that environment is expected to impact a company’s future profitability.

Hence you’ll often see us and other bottom up value investors writing about some of the macro-economic risks (or opportunities) when discussing a particular stock. And the one big issue that we’ve been worried about for the past five years is the potential for a serious slowdown in China.

I won’t rehash the case here. See Why China’s Hard Landing is a Certainty for a summary. But this macro risk has influenced our portfolio allocation in three distinct ways. One, we obviously don’t want to own resources stocks (yes, yes, put all of your comments about mining services in the comments box below). Two, we prefer exposure to foreign currencies. Three, we are wary of exposure to discretionary spending and the domestic Australian economy.

China’s growth has slowed down dramatically and the first two pennies have dropped. Mining stocks have been smashed and the Aussie dollar has fallen. Yet the third concern – the flow-on effect of a commodities meltdown on the wider Australian economy – is yet to be reflected in stock prices. Sure, the unemployment rate has crept up, but bank share prices are hitting all-time highs.

Obviously the more iterations between China’s economic growth and the company you are looking at, the less direct will be the impact. It’s hard to imagine how China’s economic growth slows dramatically without impacting commodity prices. It’s less certain, but still likely, that this will cause the Aussie dollar to fall. When it comes to the wider Australian economy, there are a lot of other factors at play.

So we are more likely to be wrong the further we extrapolate from the epicentre. 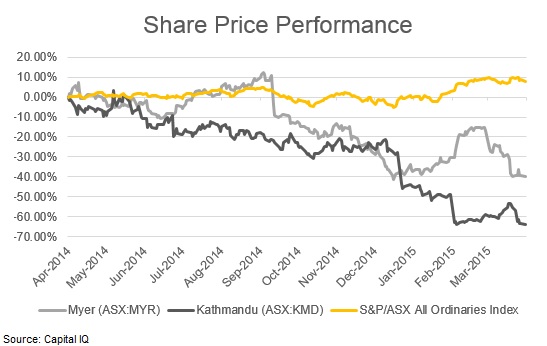 Take retailer Myer Group for example. There’s a pretty straight forward case for this stock being cheap. It trades at roughly 10 times downgraded earnings, yields 9.3% on last year’s dividends and, in our opinion, is probably making less profit than it should. The margins, at 2.4%, are very low relative to the competition and its own historical averages.

There are plenty of things to worry about. The internet and foreign retailers are encroaching on Myer’s space. The stores look tired. And Westfield is stealing the profit (almost all of the margin deterioration in recent years has been due to increasing rents). None of these issues are easily fixed.

In a normal economic environment, however, I’d say the potential rewards outweigh the risks. The time to buy retailers is when the margins are low. And at these prices a private equity bid is surely on the cards. The same case could be made for Kathmandu (see the share price chart above).

But now doesn’t feel like the time to be wading into the consumer discretionary sector.

If, like us, you’ve been preparing a long time for an Australian recession, there will be bargains aplenty in the most exposed sectors should a recession arrive. There’s no need to jump at the first half interesting opportunity that comes your way.

Steve Johnson @ForagerSteve
You should have a "Do as I say, not as I do" award for the contributor who gives the best advice that they refuse t… https://t.co/CGrrItAynz
Share on

Gareth Brown @forager_gareth
@NeCWe I hadn't put much thought into that example, but sure. It's very much driven by gov and police culture.
Share on

Gareth Brown @forager_gareth
Seconded. The push to get Australians to dob in their neighbour is one of the worst aspects of our pandemic approac… https://t.co/wwtHo3NcbU
Share on