A couple of months back, I doubled our position in QBE Insurance. The $10 share price looked like a bargain. As I said in What are we missing on QBE?, at that price you could make a very good investment case on the back of the envelope.

It wasn’t without some nervousness, though. My assumption was that QBE’s problems were industry wide, not company specific. To be sure, we would have to wait for everyone else to report their results. With the results in, it’s clear that QBE remains at the top of the pack. 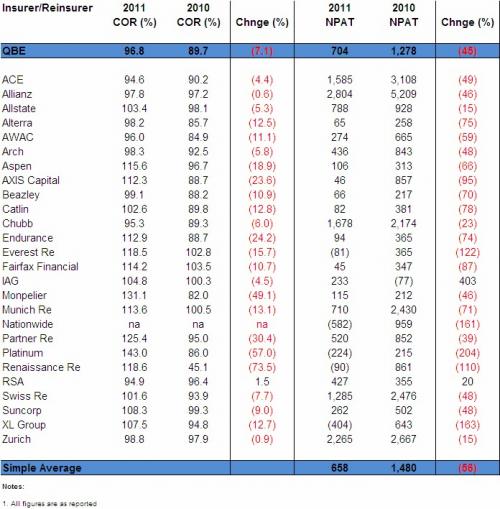 As you can see, it was a horror year for the industry. QBE did better than most, just as it has for the past couple of decades.

Some people can’t stand the volatility in insurance. I don’t mind it. Without profit volatility, we wouldn’t get the share price volatility that allows us to pick up bargains. And, unlike many other industries, I’m certain insurance as an industry will be around in 20 years’ time and larger than it is today. If QBE can stay in the top 25% of insurers ranked by profitability, it will do very well despite the ups and downs.

So far, 2012 is looking much better, with substantially less in the way of catastrophe claims and slightly higher interest rates. The share price has bounced almost 30% and, already, 2011 fading into the distance.

And one thing about this company still irks me. The current CEO, Frank O’Halloran, was almost in tears at the analyst briefing following the announcement that he would retire in August. It’s touching to see a guy care so much for the company he works for, particularly in an era where most CEOs are expensive guns for hire, happy to move on to a better role at the first available opportunity.

It was also nice that one of the analysts (he’s apparently followed QBE for 17 years) made a tribute to Frank’s efforts and the global insurance business he has built during his 14 years at the helm. Then came one of the more interesting questions I’ve heard from an investment banker: ‘If there’s one thing you could change or achieve over the next six months, what would it be?’ Ok, so you don’t need much to make it into the list of top questions asked by investment bank analysts. But I thought it provided a great opportunity for Frank to talk about the opportunities for the business and the change required to make the most of them.

And Frank’s response? ‘All I want is for every analyst to have a buy recommendation on the stock by August’.

Really? That’s it? He went on to say that Tony Jackson, QBE’s new global head of investor relations, was one of its ‘best acquisitions’. O’Halloran is obsessed with the share price and the rest of the board are probably the same. Jackson used to cover QBE as an analyst for Macquarie Group, now he’s on the other side of the fence telling QBE how to rub the rest of the analysts the right way. So now there’s more disclosure, more one-on-ones and more ‘we’ll discuss this offline’. The disclosure in itself isn’t a bad thing. But the company is being led by the analysts when it should be the other way around.

So here’s my final tip for Frank: it ain't going to make a difference. When it’s hailing and flooding, they’re going to sell your stock. When it’s clear skies and high interest rates, they are going to buy it. Nothing you or Tony Jackson can do is going to change that, so you might as well just get on with running the business.

ForagerFunds @ForagerFunds
"For all the talk of interest rates rises and the doom and gloom about technology #stocks right now ... Whispir is… https://t.co/t5HI7KRwF0
Share on