Find a Masochist to Manage Your Money

Ok, masochist is taking it a touch too far. Having someone who enjoys pain managing your money could well be a recipe for disaster. But the capacity to endure pain can be very valuable.

Value investing doyen Tom Russo spoke at length on this topic at the 8th Value Investing Congress in Trani, Italy. The ‘capacity to suffer’, as he calls it, is something he looks for in listed companies. The three examples he cited were Nestle, Pernod Ricard and SABMiller. All three have been able to invest huge sums of capital in attractive opportunities, despite those investments being to the detriment of short-term profits.

Nestle spent hundreds of millions of dollars on the Nespresso concept (starting way back in 1986) before it became a runaway success. Pernod Ricard kept investing in China through a downturn in the early 2000s. Competitor Diageo packed its bags and headed home and, when the market turned, Pernod Ricard was left with the market to itself (now Diageo is paying a fortune to buy its way back in to the Chinese market). International brewer SABMiller has done the same in China and also in its home continent of Africa.

Despite civil wars, military coups and hyper inflation, SABMiller kept investing. In many African countries, the only competitor today is home brew.

The advantage of the capacity to suffer is that there are not many companies that can afford to make decisions that are in their long-term interests simply because, as is often the case, long-term prosperity is to the detriment of short-term profits. You might think of it as ‘time horizon arbitrage’. Because so few companies, managers and boards have a genuinely long-term focus, there is less competition and excess profit available for those that put genuine value creation ahead of this year’s profits.

In his 2004 letter to Berkshire Hathaway shareholders, Warren Buffett explained how crucial the concept has been to Berkshire’s insurance operations. Using the example of National Insurance (NICO), a company Berkshire bought in 1967, he said:

What we’ve had going for us is a managerial mindset that most insurers find impossible to replicate. Take a look at the facing page. Can you imagine any public company embracing a business model that would lead to the decline in revenue that we experienced from 1986 through 1999? 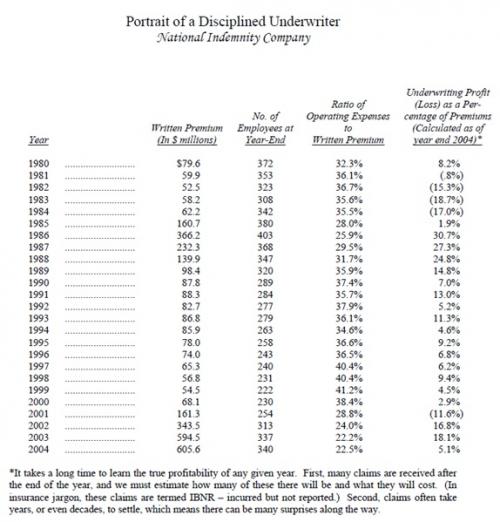 [the] colossal slide, it should be emphasized, did not occur because business was unobtainable. Many billions of premium dollars were readily available to NICO had we only been willing to cut prices. But we instead consistently priced to make a profit, not to match our most optimistic competitor. We never left customers – but they left us.”

Now look at the last five years of the table. NICO’s written premiums rose 10-fold in the five years following 1999, and every single one of them was highly profitable. How many management teams have the leeway, or even the discipline, to wait 13 years for their day in the sun?

Managed funds can play that role too, but only if the fund’s investors have the same capacity to suffer. Most fund managers aren’t chasing one month returns because they think it’s the best way to make long term returns. They do it because their investors judge them month to month and if they don’t deliver, they get the sack.

As a private investor, my capacity to suffer was immense. I had the good fortune to be born with a constitution that was immune to market noise. I didn’t care about daily price fluctuations. I didn’t even look.

As a fund manager, I find myself thinking about the Value Fund’s unit price more than I should. When the first question everyone asks is ‘how’s your performance?’, it’s hard not to. But I told people exactly how I was going to manage the fund when we kicked it off in late 2009. We have been very clear that we will pursue long-term prosperity at the risk of short-term underperformance.

So far, I’ve been blessed with a bunch of investors who get it.