China’s Boom: It Won’t Last But it Won’t End Now 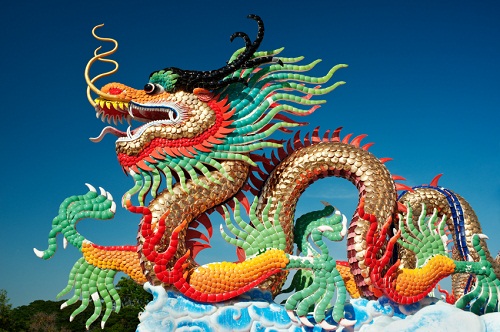 So the problem with Japan – and indeed with every other country I can think of that suffered very long periods of post-boom stagnation – was massive over-investment based on a very distorted investment-driven growth model. The period of stagnation was partially caused by the struggle to service excessive levels of debt, partly caused by the continued capital misallocation, albeit at a slower pace, and partly caused by the effective writing down of all that overstated GDP.

These – with the possible exception of the debt – are not the problems from which the US or Europe are suffering. They suffer from a typical debt-fueled overconsumption boom, whereas Japan suffered from a typical debt-fueled over-investment boom, and Japan’s period of over-investment was much, much more extreme (centralized investment booms can last much longer and go much further than decentralized consumption booms). This is why I think the Japanese experience tells us almost nothing about what Europe and the US will go through.

On the other hand, it might tell us a lot about what China will go through. In fact we can make a more general point. Command economies (Japan, the USSR, Brazil and many others during their “miracle” periods) tend to have much more rapid investment-driven growth during the good times and much more difficult and longer-lasting adjustments. Capitalist democracies are more prone to consumption-driven booms, which aren’t as extreme and don’t last as long, and their adjustments tend to be brutal but relatively quick. – Michael Pettis, August 2011

Michael Pettis is a professor at Peking University's Guanghua School of Management, a Senior Associate of the Carnegie Endowment for International Peace and my favourite commentator on the Chinese economy (I have included some interesting links at the bottom of the page).

When the US, Europe and most of the developed world entered a recession in 2008, I expected the impact on China’s ‘export-driven’ economy to be dramatic. So did most of the world’s investors. Commodity prices plunged, the Aussie dollar traded down to US60 cents and … the Chinese economy grew 9.1%, only slightly less than the prior year.

The intriguing part was that the trade component of China’s economy did indeed collapse. Net exports contributed 8% of GDP in 2008 and only 4% in 2009. Yet the overall economy still grew healthily. It seems the Chinese economy isn’t that export driven at all.

Those worried about another global recession impacting China and its demand for Australian resources shouldn’t be losing sleep at night. In fact, net exports represent only 5% of Chinese GDP today. Even if the contribution halved again, that would only subtract 2.5 percentage points from China’s very healthy growth rates.

If China is not an export-driven economy, then, what is driving the growth?

The four components of China’s GDP – consumption, investment, government spending and net exports – are shown in the 30-year chart below. You can see net exports down the bottom of the graph, contributing strongly to growth in the early part of the 2010 decade and then declining rapidly towards the end of it. But now take a look at the consumption and investment lines. Consumption has declined from more than 50% of GDP – a low but relatively normal level for a rapidly growing economy – to 36% in 2010. So much for China’s consumers saving the world. 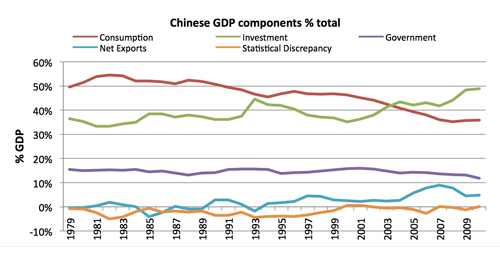 Investment, or fixed capital formation, has taken up the slack, particularly in the last decade. It grew from 35% of GDP in 2000 to almost 50% of GDP today (for comparison, in the US consumption and investment represent 71% and 15% of GDP respectively. In Australia the numbers are 54% and 28%).

The chart also explains how China sailed through a global recession; it simply stimulated investment even further to take up the slack from declining net exports. It also explains why demand for Australian resources has been so voracious; it takes a lot more iron ore to build a city or a high speed rail line than it does to make a Big Mac.

But it also begs many questions about the future. How long can this investment driven growth be sustained? What are the long-term consequences of an investment binge this large?

It’s not immediately obvious why an investment bias should be a problem. In fact, many observers see China’s new cities and shinny fast rail networks as signs of its progress. A comment on last week’s blog entry is a perfect example:

I'm sitting here having breakfast in a very nice hotel in Shanghai. I'm looking out the window at all the impressive architecture of their new "Wall Street". Yesterday I went to the Shanghai Urban Planning Centre. I looked at the details of their 2006 to 2020 urbanisation plan which is on public display. They have done so much already and it’s another 9 years to go on this plan alone.

My tour guide tells me there are dozens of inland cities that haven’t even started yet. "China hitting the skids ??" I would say there is a long way to go in the China story yet. Of course there will be ups and downs but history will probably tell us they were blips in this long story.

It’s true. Investment is generally a good thing and I’ve been a strong advocate of using Australia’s resources windfall to improve our own country’s infrastructure. In China, however, investment has become the driver of GDP growth, as opposed to one component of a healthy, growing economy. In an editorial piece for the New York Times, Pettis explained why this over-reliance on investment is a problem:

In all previous cases of countries following similar growth models, the dangerous combination of repressed pricing signals, distorted investment incentives, and excessive reliance on accelerating investment to generate growth has always eventually pushed growth past the point where it is sustainable, leading always to capital misallocation and waste.  At this point – which China may have reached a decade ago – debt begins to rise unsustainably.

China’s problem now is that the authorities can continue to get rapid growth only at the expense of ever-riskier increases in debt.  Eventually either they will choose sharply to curtail investment, or excessive debt will force them to do so.  Either way we should expect many years of growth well below even the most pessimistic current forecasts.  But not yet.  High, investment-driven growth is likely to continue for at least another two years.

It’s no different to the housing boom in the US and Spain. Distorted incentives and price signals led to a construction boom on a grand scale. Those construction numbers get included in GDP at the time. Then you turn around a few years later and realise there are way too many houses, they aren’t worth what it cost you to build them and that the GDP you reported a few years back was a furphy. If you funded the construction with debt, you also have a potentially insolvent banking system.

It happened in Japan in the 1980s. And it’s happening in China now. A recent Wall Street Journal article quoted Fitch’s estimates of the debt explosion in the Chinese economy: ‘the ratio of outstanding credit to GDP rose from 124% at end-2007 to 174% at end-2010, and is on pace to reach 185% in 2011. Adding in black-market lending and the increasing use of IOUs to settle payments takes the total even higher.’.

So where does this end? As Pettis points out, there’s no constraint just yet:

‘My guess, and it is only a guess, is that China can continue with the current growth model for at least another four or five years before it runs out of debt capacity – although when it does, it runs the risk of falling into the debt crisis that has stopped every previous example in history of an investment-driven growth miracle. Of course I am hoping that the leadership radically changes the model long before we hit the debt capacity limit.

But the point is that I don’t think we are there yet. Debt levels are very worrying, and the structure of the debt – when you can actually figure it out – is even more worrying, but I believe we are not yet on the verge of a debt crisis…’

In fact, it’s unlikely there will be a debt crisis. China’s economic ‘miracle’ will end with an economy riddled with non-performing loans and underutilised assets. The authorities will then have to trade off short-term pain, in the form of unemployment and economic contraction (the American way), against dragging the adjustment out over 20 years and enduring a lost decade or two (Japanese style).

China’s leaders are likely to choose the socially acceptable later option. Whichever way it plays out, though, assuming the current level of demand for Australian resources is sustainable is very risky businesses. Assuming recent growth rates are sustainable is nothing but folly.

Note: Below I have linked to some interesting Michael Pettis references. If you find other useful material, add it via the comments box below.

Pettis’s China Financial Markets blog contains all of his recent thoughts. Recommendations include Big in Japan and Some Predictions for the Rest of the Decade.

FT Alphaville’s first (and only, as far as I can tell) podcast was with Pettis and summarises succinctly the entire landscape.

Then there’s China’s Debt Monster on the New York Times site and why we should Get Used to Slower Chinese Growth on the Wall Street Journal.