Nothing particularly good happened in 2012. The economic Armageddon in southern European countries worsened. Unemployment reached 25% in Greece and Spain. In both countries, more than one in two people aged 15-24 that want a job don’t have one.

Greece agreed a ‘debt swap’ in March of last year – swapping an old €100 debt for a new €30 debt is a default in anyone else’s language – and is no chance of repaying what’s left. Portugal and Spain will likely need their own swap at some point and even France, one of the economic giants of the region, had its debt downgraded by ratings agency Standard and Poor’s in October. 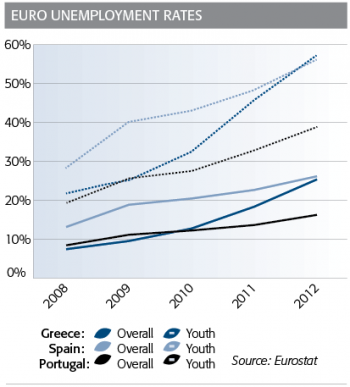 On the other side of the Atlantic, the US government did nothing to fix its long-term problems. The country racked up its fourth largest government deficit, as a percentage of GDP, since the Second World War. And, in August, political wrangling sent the US government absurdly close to defaulting on its outstanding debt as Republicans refused to raise the US$14 trillion limit on Federal Government borrowing.

Closer to home, the Chinese economy slowed markedly. The 7.4% GDP growth registered for 2012 was the third lowest of the past 30 years and the structural problems with its growth – overreliance on debt-funded infrastructure spending – became publicly acknowledged by the IMF, the World Bank and the Chinese government.

Asia’s other economic giant, Japan, reaffirmed it's basket-case status. Another recession. Another year of piling up government debt, taking the total debt to GDP ratio to an eye-popping 230%. And another change of prime minister, the fifth in five years and back to Shinzo Abe, the guy who had no idea how to fix the country’s problems when he last had a go at running it in 2007.

Despite all this, the world’s stockmarkets had their best year since 2009. The US’s S&P 500 returned 10.5%, including dividends. The London Stock Exchange’s FTSE index rose 5.8%, the Euro Stoxx 50 rose 17% and the ASX All Ordinaries added 19%, also including dividends. Our own Value Fund was up 31% and, best of all, Greek Government Bonds returned investors 78% for the calendar year.

Before you write off financial markets as absurd and their participants as loonies, there are important lessons for all of us in 2012’s very healthy returns.

Markets didn’t rally because of what happened last year. They rallied because of what didn’t happen. At the end of 2011, the general consensus was that the Eurozone was about to collapse and send the world economy into another cardiac arrest.

In his last weekend briefing of 2011, Alan Kohler told his Eureka Report subscribers that he was significantly reducing his ‘already reduced exposure to equities, possibly to zero’ because of the high risk of ‘another major panic sell-off on the market’.

Morgan Stanley’s equity strategist predicted a precise 7.2% fall in the US market at the start of 2012. Apparently the ‘US presidential election, slower growth in China and Europe’s debt crisis’ would deter investors.

Markets aren’t driven by what actually happens. They are driven by what happens relative to the prevailing consensus view. Nothing particularly good happened in 2012. But some of the really bad stuff that had already been priced in failed to transpire, and up markets went.

The key to happiness, my grandmother tells me, is low expectations. The key to high stockmarket returns would seem to be the same.